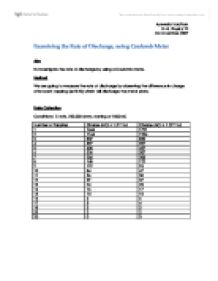 Examining the Rate of Discharge, using Coulomb Meter Aim To investigate the rate of discharge by using a Coulomb metre. Method We are going to measure the rate of discharge by observing the difference in charge after each tapping (until 20) which will discharge the metal plate. Data Collection Conditions: 5 volts, 220,000 ohms, starting at 1800 nC Number of Tapping Charge (nC) ...read more.

This can also be expressed by the equation (q being the charge n being the number of taps). There were errors here and there which conducting this experiment, making the reading we got inaccurate. The results we got form this experiment could have been more accurate if the wires had less internal resistance. Also, the power pack was not supplying the accurate amount of voltage as labeled, better and more reliable power packs should be provided to us. ?? ?? ?? ?? Aysweria Naathan IB HL Physics Y2 26-November-2007 ...read more.