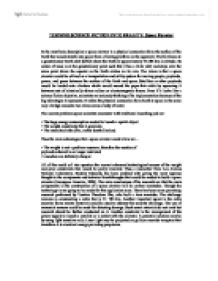 In the most basic description a space elevator is a physical connection from the surface of the Earth that would stretch into space from a floating platform in the equatorial Pacific Ocean to a geostationary Earth orbit (GEO) above the Earth at approximately 35,786-km in altitude. Its center of mass is at the geostationary point such that it has a 24-hr orbit and stays over the same point above the equator as the Earth rotates on its axis. The vision is that a space elevator would be utilized as a transportation and utility system for moving people, payloads, power, and gases between the surface of the Earth and space. Satellites or other payloads would be loaded onto climbers which would ascend the paper-thin cable by squeezing it between sets of electrically driven rollers or electromagnetic forces. Even if it looks like a science fiction objective, scientists are seriously thinking of its implementation because of the big advantages it represents. It makes the physical connection from Earth to space in the same way a bridge connects two cities across a body of water.

• The huge energy consumption needed to launch a spatial object

• The weight constraints that it generates

Thus the main advantages that a space elevator could allow are –

• The weight is not a problem anymore, therefore the number of

payloads onboard is no longer restricted

All of this could call into question the current advanced technologies because of the weight and price constraints that would be partly removed. Thus a researcher from Los Alamos National Laboratory, Bradley Edwards, has been credited with giving the most rigorous thought to the components and technical breakthroughs that would be needed to build a space elevator (Aerospace America, 2006). The main conclusions of his research are that the main components in the construction of a space elevator will be carbon nanotubes. Though the technology is not going to be ready for this application soon. There has been some promising research performed by Yuntian Theodore Zhu, who built a 4cm nanotube. The challenge remains in constructing a cable that is 37, 786 km. Another important aspect is the cable security. Some smarts materials could be used to address this security challenge. The use of nanoscale sensors could be made for detecting damage. Such smart materials do not exist but research should be further conducted on it. Another constraint is the management of the power supply to launch a satellite or a rocket with the elevator. A potential solution may be by using light sensitive cells. Laser light may be projected on gallium arsenide receptors that transform it to electrical energy providing propulsion. 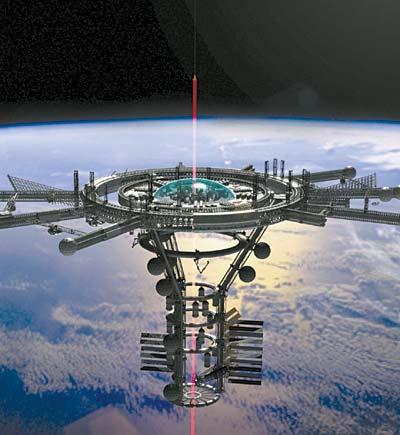 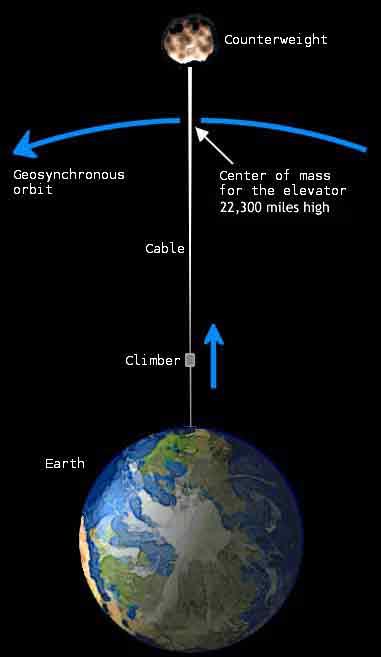 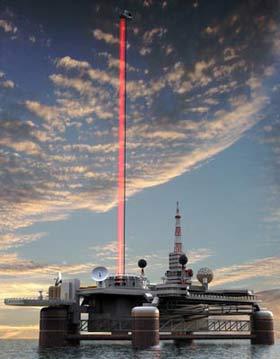 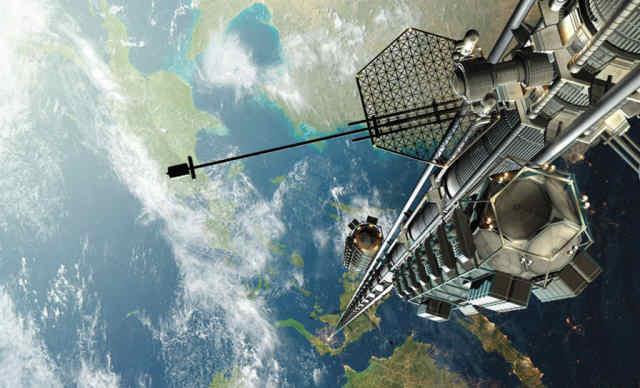 The idea of building a tower from the surface of the Earth into space, the sky, or the heavens dates back to some of the very earliest known manuscripts in existence. The writings of Moses, about 1450 BC, in his book Genesis, chapter 11, reference an earlier civilization that in about 2100 BC tried to build a tower to heaven out of brick and tar. This structure is commonly called the Tower of Babel, and was reported to be located in Babylon, a city in ancient Mesopotamia. Later in chapter 28, about 1900 BC, Jacob had a dream about a staircase or ladder built to heaven, commonly called Jacob's Ladder. More contemporary writings on the subject date back to K.E. Tsiolkovski in his manuscript "Speculations about Earth and Sky and on Vesta," published in 1895. No doubt the idea for building a tower from the surface of the Earth into space has been dreamed of, invented, and reinvented many times throughout modern civilization.

The first published account describing a space elevator that recognized the utility of geosynchronous orbit did not occur until 1960. Yuri Artsutanov, a Leningrad engineer, published a non-technical story in a Sunday supplement to Pravda, which did not become known in the West. Later, in 1966, a group of American Oceanographers led by John Isaacs published a short article in Science on a pair of whisker-thin wires hanging from a geostationary satellite. Again, this did not come to the attention of the space flight engineering community. Finally in 1975, Jerome Pearson, working at the Air Force Research Laboratory, also independently invented the space elevator and published a technical paper in Acta Astronautica. This publication brought the concept to the attention of the space flight community and later inspired Sir Arthur Clarke to write his novel, The Fountains of Paradise, about a space elevator based on a fictionalized Sri Lanka, which brought the concept to the attention of the entire world. Pearson later participated in the NASA Marshall Tether workshops beginning in 1983, and brought the space elevator concept into the space tether technical community. The bibliography in this publication contains many contemporary writings on this and related subjects since 1960. 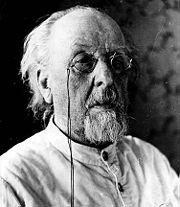 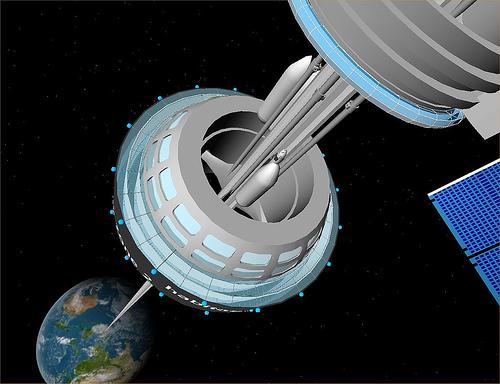 A space elevator would reduce the costs of sending cargo up into space from US$2,000 per pound down to $400 per pound. This cost reduction would have a great effect based on research, such a telecommunication, energy and pharmaceutical.

Using an outer space elevator instead of rockets would also be safer, easier, and gentler on fragile cargos such as electronics. Having a platform up in space can also provide room for large solar panels, more communication, cameras and hopefully, even people.

A space elevator would need a fixed lined, or cord that stretches from an anchor on Earth to station out in space, the station acts like a counter weight forever “held” above the planet by the antifungal force from the earth’s rotation.

The cord or shaft will be a carbon nanotube composite ribbon stretching around 99,779 kilometers up into space. The ground floor (anchor) will be a platform anchor in the sea, the elevator itself will be made up of robotic lifters that can climb up and down the ribbon at dizzying speeds without jarring its load, and the “top floor” will be space platform that also serves as a counter weight that will hold the whole thing upright. Gravity at one end and centripetal acceleration at the other end, will keep the space elevator from falling down on it.

So far so good the physics was the easy part. Science fiction writers had known all along that a space elevator would be possible in theory. The problem was the making of a string using a material strong enough to resist he incredible forces that the space elevator will go through. 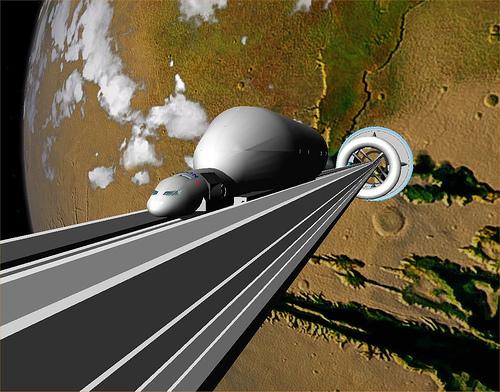 But, their problem was solved in the 1990’s.When Carbon were discovered. Carbon nanotubes are many times stronger than steel. And now that carbon nanotubes are out of the lab and commercially manufactured, the few pieces of the space elevator are finally falling into place.

A carbon nanotube string the width of sewing thread could easily lift a large car. A nanotube elevator ribbon would need to be no thicker than plastic food wrap. Nanotubes would also make the elevator car light, though large. "This material is applicable to everything," says Ken Dividian, former director of operations for the X Prize Foundation and the current NASA contractor overseeing the Centennial Challenges program, which helped coordinate the Space Elevator Games. "NASA is very interested in this technology."

A handful of companies worldwide, like Carbon Nanotechnologies in Texas, Mitsui in Japan, and Nanoledge in France, are already producing purified nanotubes. The longest nanotubes yet produced measure only a few inches, but that doesn't prevent them from being ribbon-ready. "The nanotubes themselves don't need to be 62,000 miles long," Edwards says, a former Los Alamos National Laboratory astrophysicist who founded Sedco, one of the startups, "space will be open for real activity.”. "Cotton fibers aren't long enough to make your shirt--you bond them together."

This feasibility report on the design and construction of a space elevator addresses all technical aspects of the problem from the deployment of the elevator to its survivability. This is not a definitive study or the final say but a first cut at the concept. What we have found is interesting. As we will discuss, building a space elevator will be challenging but not impossible and the initial elevator could be built for approximately $40 billion, less than many of our larger national programs. Yet the long-term return we (humans) would receive on the construction of a space elevator is staggering, it would literally change our world.