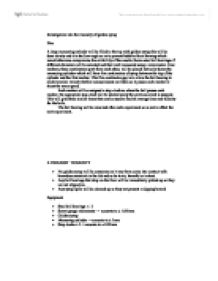 Investigation into the viscosity of golden syrup

Investigation into the viscosity of golden syrup

A large measuring cylinder will be filled to the top with golden syrup.this will be done slowly and at a shallow angle so as to prevent bubbles from forming which would otherwise compromise the reliability of the results. Seven steel ball bearings of different diameters will be selected and their radii measured using a micrometer. Four markers, three centimetres apart from each other, will be placed vertically down the measuring cylinder which will have five centimetres of syrup between the top of the cylinder and the first marker. This five centimetre gap is to allow the ball bearing to reach terminal velocity before measurements are taken so it passes each marker at about the same speed.

Each marker will be assigned a stop-clock so when the ball passes each marker, the appropiate stop-clock will be started swilst the previous clock is stopped. This will give three similar times that can be used to find an average time and velocity for the balls.

The ball bearing will be removed after each experiment so as not to affect the next experiment.

A THOUGHT  TO SAFETY

The screw gauge could be clamped to different pressures so the results may have varied where consistency was required.

Changes at what time

The above moment was reached

Since it was a human jugding when to take results, this experiment would not work for fluids of such a low viscosity that objects could pass all the markers before the eye could follow and track it. Computers and electronic sensors would be needed to replace the human element in the experiment.

If the experiment could be done again lasers would be used instead of my eyes and the markers. More accurate results would results from more accurate measuring devices would be needed such as screw gauge micrometers that measure whilst clamping with the same pressure each time.

Each experiment would be repeated more so as to get a morea ccurate average and the experiment  would be done in a temperature controlled environment so the viscosity remained the same.