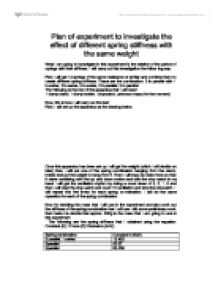 What I am going to investigate in this experiment is the relation of the period of springs with their stiffness. I will carry out this investigation the following way:

The following is the rest of the apparatus that I will need:

Now, this is how I will carry out the test:

First, I will set up the apparatus as the drawing below.

Once this apparatus has been set up I will get the weight (which I will decide on later) then I will put one of the spring combination hanging from the clamp holder and put the weight to hang from it. Then I will input an extra force so that it starts oscillating with the up and down motion and with the stop watch in my hand I will get the oscillation rhythm by doing a count down of 3, 2, 1, 0 and then I will start the stop watch and count 10 oscillation and stop the stopwatch. I will repeat this five times for each spring combination. I will do the same operation for each of the spring combination.

Table to show value that will be used to draw graph:

Looking at the results that I obtained in this experiment and processing into a graph as previously done it is obvious that stiffer the spring constant faster will be the period, also a pattern can be seen which is that there is an indirect       proportionality between the stiffness of the spring and the period. Now looking at the equation of the graph that I obtained Y=3.2332x to the power of-0.4675 which suggests to me that if I draw a graph of the period against 1/square root of K. Now I came to this conclusion by first supposing that there should a direct proportionality between the period and the stiffness and that it could be compared to Y=mx + c and that x should be the power I am looking to get the direct proportionality, straight line graph.

In my opinion I have enough results however it would have been better I had been able to obtain more evidence this way I might have been able to take away some results which were a bit of the line and maybe cause some partial error. But still yes I have enough evidence to draw a conclusion which led me to draw this conclusion. The period of an oscillating spring is directly proportional to 1/the square root of k (its stiffness).

First to support my evidence I could have used different springs with different stiffness which could give me even more support on my conclusion as these were only combination of similar type of springs and if others were used it would definitely prove that my conclusion is right. Also I think that my method can improved by putting an arrow along a stick in the middle of the spring oscillation and count the oscillation form that point because this way you always start and stop the stopwatch at the same tome as I encountered the problem that I wasn’t sure if it stopped there so it makes the timing easier. Also it reduces the time error as it is going at a middle speed not its maximum speed there are less chance of having time errors.