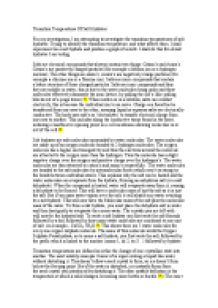 Plan to investigate the transition temperature of salt hydrates

﻿Transition Temperatures Of Salt Hydrates For my investigation, I am attempting to investigate the transition temperatures of salt hydrates. Trying to identify the transition temperature, and what affects them. I shall experiment on a salt hydrate and produce a graph of results. I shall do this for all salt hydrates I am testing. Salts are chemical compounds that always contain two things: Cation?s and Anion?s Cation?s are positively charged particles (for example a lithium ion or a hydrogen nucleus). The other things are anion?s. Anion?s are negatively charge particles (for example a chlorine ion or a fluorine ion). Salts are ionic compounds that contain a lattice structure of these charged particles. Salts are ionic compounds and thus they are soluble in water, this is due to the water molecules being polar and these molecules effectively dismantle the ionic lattice, by pulling the ion?s (like pulling blocks out of a jenga tower) [1]. When molten or in a solution, salts can conduct electricity, this is because the individual ion?s can move. Charge can therefore be transferred from one area to the other, meaning liquid or aqueous salts are electrically conductive. The body uses salt?s as ?electrolytes? to transfer electrical charge from one area to another. ...read more.

of the salt hydrate whilst it is cooling, and note the temperature at which this occurs. Than attempt to alter the physical properties of the salt hydrate by heating and cooling and then gauge how I have affected it. Bring into play quite a large human error risk. I believe the transition temperatures of the salt hydrates can depend on several factors. These include: 1. The strength of the intermolecular forces between the salt and water molecules. As there are three different types of intermolecular bonding (from weakest to strongest: - Instantaneous Dipole -Induced Dipole, Permanent Dipole-Permanent Dipole, and Hydrogen Bonding). 2. The ions found in the salt will determine which type of intermolecular force will occur. 3. The shape of the salt molecules. This will determine how many water molecules can combine with it. 4. The salt molecule itself should affect how many water molecules are combined to it. I will briefly explain what the intermolecular forces are. Atoms are chemically bonded together by either ionic or covalent bonds. Ionic bonds are where one or more atoms donate electrons. And the other atom(s) accepts these electron(s). This process forms ionic molecules which are attracted to each other by their difference in charge (because one atom donated, and one atom accepted, each ion will have a + and ? charge respectively). ...read more.

Then by performing some calculations I will be able to find the number of water molecules associated with each salt hydrate. For the second part of my experiment I intend to set up apparatus that will allow me to heat up the salt hydrate, but then allow it to cool. But whilst it is cooling I will need to find a way to slow down the rate of cooling. This will allow me to detect the transition temperature to a greater degree of accuracy. As the salt hydrate is heated up the compound will melt. Then as the compound cools, a steady rate of decline will be observable. But as the allotrope (crystal state) [8] changes and a salt hydrate reforms, there will be an interruption in the rate of decline of temperature. This is the temperature at which my salt hydrate has been formed. And is the transition temperature of a salt hydrate. I believe that the transition temperatures of similar salts like group 2 chloride salts when analyzed using graphical methods, will show a predictable trend, which I can use to predict the more volatile group 2 chloride salts. If I can successfully predict the trends I will consider my investigation a success. ...read more.