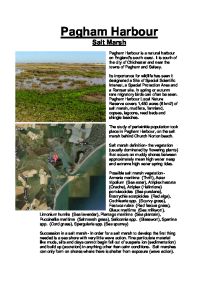 Planning an investigation into salt marsh and sand dune vegetation.

This will eventually lead to the climax community. Measuring Periwinkle population- Capture-recapture- 1) Quadrats placed on the ground to mark 1m2 area 2) Marked the area distinctly with rocks at corners and bamboo cane at centre so it could be located later 3) Systematically check each square for periwinkles 4) As each periwinkle is identified record number and mark it so you later identify it as marked but not so it will draw the attention of predators unnaturally altering the periwinkle population 5) Return each periwinkle to the location it was found in 6) Remove quadrats and leave area for an appropriate length of time (periwinkles move slowly therefore hours) 7) Return to site and lay quadrats 8) Once again systematically check each square 9) Record each periwinkle found and number that are marked 10) Return each periwinkle to their original location 11) Perform equation to gain an estimate for the population of periwinkles per m2 East Head Sand dune East head is a sand dune spit at the eastern side of the entrance to Chichester harbour. It is an SSSI and a Ramsar site. ...read more.

This leads to a stable or fixed dune community and the biodiversity increases as the abiotic factors that were so extreme in the mobile dunes improve. Nutrient status of the 'soil' improves and the impact of salt spray and wind scour decrease. The nature of the fixed dune community is extremely variable depending on the pH of the substrate and activities of grazing animals, especially rabbits. A dune slack may be created when a blow-out (a damaged area of dune knocked back to bare sand by a combination of erosion and strong wind) takes the sand below the level of the water table. If the dune slack is old enough then the community may develop to scrub, there is some evidence for this at East head as small trees and brambles are growing, usually willow (Salix spp.), with moisture loving associates such as marsh pennywort (Hydrocotyle vulgaris), marsh orchids and various rushes and sedges. Experiment- At east head we took a dune profile and at each site, very 10m apart measured the abiotic factors, air and soil temp, wind speed at ground level, light intensity and moisture at each site. Biotic factors, the percentage of ground coverage by different plants. ...read more.