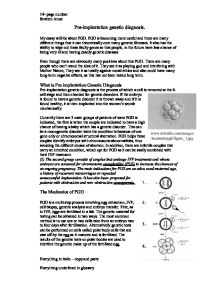 Pre-implantation genetic diagnosis. My essay will be about PGD. PGD is becoming more useful and there are many different things that it can theoretically cure many genetic illnesses. It also has the ability to wipe out these faulty genes so that people, in the future have less chance of being very ill and having deadly genetic diseases Even though there are obviously many positives about this PGD. There are many people who can't stand the idea of it. They see it as playing god and interfering with Mother Nature, They see it as totally against moral ethics and also could have many long-term negative effects, as this has not been tested long term. What is Pre implantation Genetic Diagnosis Pre-implantation genetic diagnosis is the process of which a cell is removed at the 8-cell stage and then checked for genetic disorders. If the embryo is found to have a genetic disorder it is thrown away and if it is found healthy, it is then implanted into the women's womb mechanically. Currently there are 2 main groups of patients of were PGD is indicated, the first is when the couple are indicated to have a high chance of having a baby which has a genetic disorder. This can be a monogenetic disorder were the condition is because of one gene only or chromosomal structural aberration. PGD helps these couples identify embryos with chromosome abnormalities, thus avoiding the difficult choice of abortion. In addition, there are infertile couples that carry an inherited condition, which opt for PGD as it can be easily combined with their IVF treatment. (2) The second group consists of couples that undergo IVF treatments and whose embryos are screened for chromosome aneuploidies (PGS) to increase the chances of an ongoing pregnancy. ...read more.

Again, though, there are concerns that some babies would be born just for their "spare parts". Negatives of PGD It is not surprising to learn that many people have ethical concerns over both PGD and IVF. One common concern is that PGD will lead to more emphasis on society valuing "healthy" people over those deemed "unhealthy". Yet advocates of PGD point out that this technology may allow incidents of some diseases or disorders to be significantly lowered or even eliminated. Many also take issue with the idea of an embryo being created outside of the body and then being destroyed. Moreover, PGD test results are not 100% accurate. Even if a chromosomal abnormality is found, it does not guarantee that the child will be born with a particular disease or disorder. Human PGD has only been around 15 years and the real long-term effects we don't know. Therefore, we cannot be sure that even at first sight, it maybe a good idea. The long-term effects maybe very bad, obviously to have PGD it will cost a lot of money. Therefore, only the rich will be allowed to have it. This will increase the gap between wealthy and un-wealthy people. Also, interfering with the most delicate of genetics, it maybe produces a deformed baby or a baby that will have some other environmental problem. Maybe producing an end to one problem may trigger another. As PGD is very recent and the actual theoretical benefits haven't been analyzed, we cannot say anything about these long-term effects until it is tried and tested and the baby is old enough (maybe even become an adult) and then scientist cold study if there was any genetic disorder. The issue of s*x selection and PGD is also a tough one. ...read more.

Many people hold PGD responsible for this theory but to now, it still hasn't happened and for the good of mankind it shouldn't. Conclusion Overall, this topic was extremely interesting. It made me much more aware of what could actually happen when I plan to start a family of my own and the resources available that hopefully, god willing I will not use. It made me much more aware of the amount of genetic diseases and how easily you may have one in your family. Also, after hearing people's experiences it makes you appreciate how lucky you are and how hard genetic disorders are for the sufferer and his/her loved ones. It also shows that how hard it is to pass a decision in that people's opinions are so biased, some depending on what they have been through, others on what they believe in and others in what they see as right and wrong. It also made me more aware of how far technology had developed and how hard some people are working to make it develop even more whilst others are trying as hard as they can to stop it from developing at all. It also showed me how delicate god's creations are and that whenever humans interfere, the risk of getting it wrong is so great that sometimes it is not worth taking. On some subjects, like designer babies, it made me think that how such a thing like this could spark a change to life as we know it and that we should all work together to stop scientist from going that far. The case study also allowed me to understand many issues that have been talked about in detail in the news and hopefully now, I can understand what they are talking about and give my answers as a person who has a very basic bit of background knowledge. ...read more.