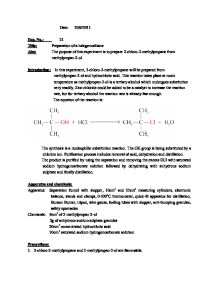 Date: 20/9/2011 Exp. No.: 21 Title: Preparation of a halogenoalkane Aim: The purpose of this experiment is to prepare 2-chloro-2-methylpropane from methylpropan-2-ol Introduction: In this experiment, 2-chloro-2-methylpropane will be prepared from methylpropan-2-ol and hydrochloric acid. This reaction takes place at room temperature as methylpropan-2-ol is a tertiary alcohol which undergoes substitution very readily. Zinc chloride could be added to be a catalyst to increase the reaction rate, but for tertiary alcohol the reaction rate is already fast enough. The equation of the reaction is: The synthesis is a nucleophilic substitution reaction. The OH group is being substituted by a chlorine ion. Purification process includes removal of acid, dehydration and distillation. The product is purified by using the separation and removing the excess HCl with saturated sodium hydrogencarbonate solution followed by dehydrating with anhydrous sodium sulphate and finally distillation. Apparatus and chemicals: Apparatus: Separation funnel with stopper, 10cm3 and 25cm3 measuring cylinders, electronic balance, stands and clamps, 0-100oC thermometer, quick-fit apparatus for distillation, Bunsen Burner, tripod, wire gauze, boiling tubes with stopper, anti-bumping granules, safety spectacles Chemicals: 9cm3 of 2-methylpropan-2-ol 2g of anhydrous sodium sulphate granules 20cm3 concentrated hydrochloric acid 10cm3 saturated sodium hydrogencarbonate solution Precautions: 1. 2-chloro-2-methylpropane and 2-methylpropan-2-ol are flammable. So, these liquids must be kept away from direct flame. Flammable 2. Concentrated hydrochloric acid is very corrosive and there are HCl fumes above the concentrated HCl solution, so we should wear safety spectacles during the whole experiment and transfer of acid should be done in fume cupboard. ...read more.

1. Concentration of nuclephile Substitution is preferred when a concentrated nucleophile is used. In this experiment, concentrated acids were used, so the concentration of the nucleophiles is very high which favours elimination. 2. Temperature High temperature favours elimination reaction, that is one of the reasons why we add concentrated HCl little by little instead of adding 20cm3 altogether, as the reaction is exothermic which release larger amount of heat, then the rate of reaction of elimination may increase (although it is still very slow). The other reason for adding concentrated HCl little by little will be discussed later. 3. Distillation of cyclohexene from the reaction mixture when it was formed. This is important because the cyclohexene formed may react with water to form back cyclohexanol. Using high temperature can ensure that cyclohexene reaches its boiling point immediately after formation and being distilled out. 4. Polarity of the solvent. Low polarity solvent favours elimination which high polarity solvent favours substitution. In this experiment, we used water as a solvent which is of a high polarity, so this increases the rate of substitution. 5. Structure of the reactant 3o carbon increases the stability of the carbonium ion formed in the intermediate. With the SN1 pathway, a carbonium ion is formed as an intermediate. The carbonium ion has higher stability with a tertiary carbon because of inductive effect. R groups (CH3 in this experiment) ...read more.

3. We were only using a measuring cylinder to measure each reagent, which was not quite accurate. Therefore, there might be a maximum error of 0.25cm3 as the measuring cylinder only had markings every 0.5cm3. When that measuring cylinder was used to measure 9.0cm3 of 2-methylpropan-2-ol, the maximum percentage error was � 100% = 2.78% In addition, the measuring cylinder was used to measure volumes 3 times. This might contributed quite a lot on the error in this experiment. Further experiments: Adding AgNO3 solution With a little bit of left-over product (2-chloro-2-methylpropane) in a boiling tube, a few drops of AgNO3 were added into the boiling tube to test for whether the product is a halogen compound. After adding the AgNO3 solution, white ppt. was formed which confirmed that the product was actually a chloro compound. This can be confirmed as AgCl(s) is white in colour, AgBr(s) is pale yellow, while AgI(s) is yellow. After the ppt. was formed, the boiling tube was brought to direct sunlight. This caused the white ppt. to turn grey and slightly purple. This was actually a thermal decomposition and the equation is: 2AgCl 2Ag + Cl2 White Grey The product was slightly purple because the silver was not evenly deposited. There were many cavities which diffracts lights, so a slightly different colour may be observed. However, this test is slightly not too accurate because carboxylic acids have been known to react in this test, giving false positives. Reference: http://chemistry2.csudh.edu/rpendarvis/SN1Elim.html http://www.chemguide.co.uk/mechanisms/nucsubmenu.html http://www.chemtube3d.com/Elimination%20-%20E1.html http://www.chemhelper.com/e1.html http://www.wellesley.edu/Chemistry/chem211lab/Orgo_Lab_Manual/Appendix/ClassificationTests/halide.html http://www.chem.ucla.edu/~bacher/General/30BL/tips/Sepfunnel.html http://en.wikipedia.org/wiki/Tert-Butyl_chloride http://en.wikipedia.org/wiki/Silver_chloride http://www.sciencelab.com/msds.php?msdsId=9927134 http://www.organic-chemistry.org/namedreactions/nucleophilic-substitution-sn1-sn2.shtm http://www.chem.ucla.edu/~bacher/General/30BL/tips/Sepfunnel.html ?? ?? ?? ?? ...read more.