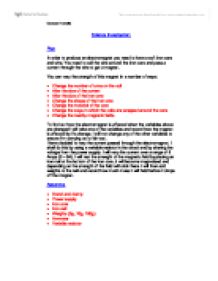 You can vary the strength of this magnet in a number of ways:

I have decided to vary the current passed through the electromagnet. I shall do this by using a variable resistor in the circuit and by altering the voltage from the power supply. I will vary the current over a range of 5 Amps (0 – 5A).

I think that the method I used was on the whole a good, efficient and reliable one. I think this because my results were quite accurate. I don’t believe that there was anything I could change to make the method any more accurate.

If I had more time to continue my investigation I could carry out some extra work to further it.

I could do another experiment which uses a similar method to demonstrate the effect on the magnetic field around a wire whilst a current is flowing through it.

A wire is coiled round an iron nail as before and set up in a circuit much similar to the one I used. A current is then passed through the circuit and wire, magnetising the nail. I would then place the nail over a pile of iron filings and the filings should stick to the nail. I would vary the current and the number of coils and see how the amount of filings attracted to the nail varies when the aforementioned factors are changed. This should give me a good idea of how the current and magnetic field around that current are directly proportional.