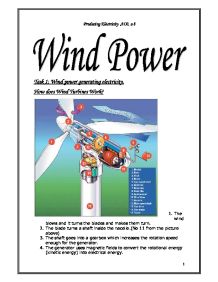 Task 1: Wind power generating electricity. How does Wind Turbines Work? 1. The wind blows and it turns the blades and makes them turn. 2. The blade turns a shaft inside the nacelle.(No 11 from the picture above) 3. The shaft goes into a gearbox which increases the rotation speed enough for the generator. 4. The generator uses magnetic fields to convert the rotational energy (kinetic energy) into electrical energy. 5. The power output goes to a transformer, which converts the electricity produced by the generator at around 700 Volts (V) to the right voltage for distribution system, usually 33,000 V. 6. The national grid transmits the power around the country.(Like shown below in the picture). Energy conversion: Induction generators: Induction generators work as device that converts the mechanical energy of rotation into electricity based on the electromagnetic inductions. How induction generators work: The energy transfer/conversion occurs in the generator. Most wind turbines use the induction generators despite the vast variety of generators because the induction generator is reliable and cost-effective. The motor consists of stationary coil of wire that carries the current to function them, wound through slots in steel lamination or what also known as the squirrel cage rotors. An electric voltage (electromotive force) is induced in a conducting loop (or coil), when there is a change in the number of magnetic field lines passing through the loop. When the loop is closed by connecting the ends external load, the induced voltage will cause an electric current to flow through the loop and load. ...read more.

* Affects television reception in the nearby surroundings. * Can be very noisy. Advantages of Fossil fuels: * Very huge quantities of electricity can be produced in one place using coal, for reasonably cheap prices. * Oil and gas transportation from and to he power stations are easy. * The efficiency of Gas-fired power stations. * A fossil fuel power station can be situated anywhere as long It has easy road access for transportation of fuel. Disadvantages of Fossil fuels: * Fossil fuels are non-renewable source of energy. * Fossil fuels cause pollution. Burning any fossil fuels produce CO2 which add to he green house effect causing the Earth to warm up. * Burning coal releases more CO2 than burning oil or gas. It also produces sulphur dioxide which contributes to acid rain. * Mining coal proved to be difficult and dangerous plus strip mining causes for large areas of the landscape to be destroyed. * Coal-fired power stations need huge amounts of fuel, which means huge amounts of coal needs to transported constantly to the power station. In order to prevent delays in coal deliveries the power station needs reserves. This means large areas of land next to the power station will be covered with piles of coal which helds up the land. Overall, from the above I conclude that the advantages of wind energy are slightly less than powerful than those of fossil fuels. On the other hand the disadvantages of fossil fuels outweigh those of the wind energy. ...read more.

So for just the 15714 5MW turbines we will need = 91141.2million this doesn't include the land rent and operation cost maintenance etc. simple is impossible to depend on wind energy alone but perhaps it can be used combined with other conventional ways of producing energy like fossil fuels. Environmental impact: Wind turbines environmental impact consists of the noise, birds getting killed and space or landscape usage. All these are minor issues that are easy to overcome. The noise, as aerodynamic designs have improved modern wind farms is much quieter. A lot quieter than fossil fuel power stations; and wind farms tend not to be close to residential areas anyways. The small modern wind generators used on boats and caravans make hardly any sound at all. Nevertheless, some migrating flock tend to attract to strong winds and in some cases are attracted by the strong wind produced by turbines and get killed. However this very rare, because prior to installation of any wind farms the area is checked for migratory routes to prevent the migrating flock. Lastly the land fill of wind farms is not a bad impact as the land can still be used for farming as the towers f the turbines are very high. the landscape issues is easy to resolve if the wind farms are installed in organized and creative array they could act as tourist attraction site for example; the picture below is of a wind farm on coast(wind speed is highest) in Denmark. ...read more.