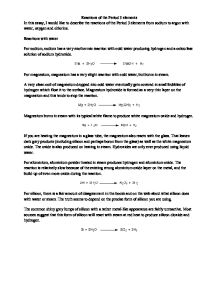 Reactions of the Period 3 elements

Reactions of the Period 3 elements In this essay, I would like to describe the reactions of the Period 3 elements from sodium to argon with water, oxygen and chlorine. Reactions with water For sodium, sodium has a very exothermic reaction with cold water producing hydrogen and a colourless solution of sodium hydroxide. For magnesium, magnesium has a very slight reaction with cold water, but burns in steam. A very clean coil of magnesium dropped into cold water eventually gets covered in small bubbles of hydrogen which float it to the surface. Magnesium hydroxide is formed as a very thin layer on the magnesium and this tends to stop the reaction. Magnesium burns in steam with its typical white flame to produce white magnesium oxide and hydrogen. If you are heating the magnesium in a glass tube, the magnesium also reacts with the glass. That leaves dark grey products (including silicon and perhaps boron from the glass) as well as the white magnesium oxide. The oxide is also produced on heating in steam. ...read more.

For phosphorus and sulphur, these have no reaction with water. For, chlorine, chlorine dissolves in water to some extent to give a green solution. A reversible reaction takes place to produce a mixture of hydrochloric acid and chloric(I) acid (hypochlorous acid). In the presence of sunlight, the chloric(I) acid slowly decomposes to produce more hydrochloric acid, releasing oxygen gas, and you may come across an equation showing the overall change: For argon, there is no reaction between argon and water. Reactions with oxygen For sodium, sodium burns in oxygen with an orange flame to produce a white solid mixture of sodium oxide and sodium peroxide. For the simple oxide: For the peroxide: For magnesium, magnesium burns in oxygen with an intense white flame to give white solid magnesium oxide. If magnesium is burned in air rather than in pure oxygen, it also reacts with the nitrogen in the air. Hence, a mixture of magnesium oxide and magnesium nitride will be formed. For aluminium, aluminium will burn in oxygen if it is powdered, otherwise the strong oxide layer on the aluminium tends to inhibit the reaction. ...read more.

For aluminium, aluminium is often reacted with chlorine by passing dry chlorine over aluminium foil heated in a long tube. The aluminium burns in the stream of chlorine to produce very pale yellow aluminium chloride. This sublimes (turns straight from solid to vapour and back again) and collects further down the tube where it is cooler. For silicon, if chlorine is passed over silicon powder heated in a tube, it reacts to produce silicon tetrachloride. This is a colourless liquid which vaporises and can be condensed further along the apparatus. For phosphorus, white phosphorus burns in chlorine to produce a mixture of two chlorides, phosphorus(III) chloride and phosphorus(V) chloride (phosphorus trichloride and phosphorus pentachloride). Phosphorus(III) chloride is a colourless fuming liquid. Phosphorus(V) chloride is an off-white (going towards yellow) solid. For sulphur, if a stream of chlorine is passed over some heated sulphur, it reacts to form an orange, evil-smelling liquid, disulphur dichloride, S2Cl2. For chlorine and argon, it obviously doesn't make sense to talk about chlorine reacting with itself, and argon doesn't react with chlorine. To conclude, as they belong to different groups, therefore, the form different products with water, oxygen and chlorine. ...read more.