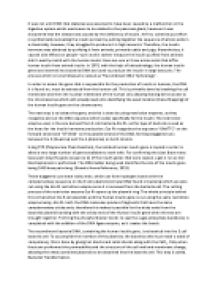 ﻿It was not until 1921 that diabetes was assumed to have been caused by a malfunction in the digestive system which was known to be related to the pancreas gland, however it was discovered that the disease was caused by the deficiency of insulin. At first, scientists put effort in synthetically recreating the insulin protein by putting together the sequence of amino acids in a chemically; however, they struggled to produce it in high amounts. Therefore, the insulin hormone was obtained by purifying it from animals, primarily cattle and pigs. Nevertheless, it caused side effects on people ?such as skin rashes- because the insulin purified from animals didn?t exactly match with the human insulin there are one or three amino acids that differ human insulin from animal insulin. In 1978, with the help of biotechnology, the human insulin gene was inserted into bacterial DNA and used to produce the insulin in large amounts. ...read more.

Eco RI recognises the sequence ?GAATTC? on the forward strand and ?CTTAAG? on the parallel strand of the DNA, forming staggered cuts between the G (Guanine) and the A (Adenine) on both strands. Using PCR (Polymerase Chain Reaction), the isolated human insulin gene is copied in order to allow a very large number of genes available to work with. For confirming the sizes (how many base pairs long the gene sequence is) of the insulin genes that were copied, a gel is run as Gel Electrophoresis is performed. The DNA ladder being used identifies the size of the insulin gene being 1430 base pairs long. (Genetic Home Reference, 2015) These staggered cuts leave sticky ends, which can form hydrogen bonds with the complementary sequence on the E.coli plasmids (circular DNA found in bacteria) which are also cut using the Eco RI restriction enzyme once it is removed from the bacteria cell. ...read more.