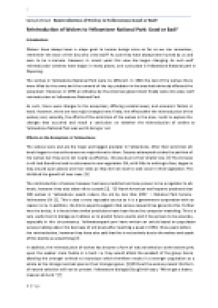 Reintroduction of Wolves to Yellowstone National Park: Good or Bad?

Also, this was the natural ecosystem in Yellowstone and it was by the interference of humans that this natural balance was shifted and so the reintroduction is in essence, humans undoing their original mistake. Effects on Society/Economic Factors The ranch owners in Wyoming, the home of Yellowstone, were firmly against the reintroduction of wolves to Yellowstone. This was because they felt they were viscous creatures that only killed their cattle and were seen as a major threat to their business. This statistically has been found to be in accurate. It was due to this strong opposition, which is now even going on in other area of the world were wolf reintroduction is being tried, like New Mexico, that the wolf reintroduction programme look long to happen. [8] In 1987 Defenders of Wildlife introduced the ?wolf compensation fund? that eased ranch owners and lifted some of the burden cause by wolves to be eased. They used donations to pay ranch owners the amount of money their cattle would sell for based on average cost of the animal in that year. A final reintroduction plan came together in 1994, after two decades of dispute (the original wolf reintroduction team was put together by the government in 1974). ...read more.

However as the number of pups that are able to survive is ever fluctuating this suggests that the wolves can still survive. In addition, the fact that wolves can not be shot inside the park means that the packs that are within the park will still flourish and so the land within the park would have the strongest of packs as these lands would be the lands that the wolves would want most. This means, that the wolf species within the National Park itself will, in a worst case scenario, still be able to survive and not only will they survive but they will be the strongest of the wolves in the area whilst the wolves outside the park will die out. However, this still allows the benefits to the ecosystem within Yellowstone to benefit. Overall, this therefore suggests that the wolves were without doubt a viable investment by the government and the reintroduction was of benefit. Conclusion To conclude, the wolves of Yellowstone were without doubt worth it and their reintroduction had resulted into a host of benefits. Benefits like the stronger wider ecosystem at Yellowstone, the increase in visitors to Yellowstone to name a few. It is without doubt that the reintroduction of wolves to Yellowstone National Park is a very good thing and it was most certainly worth it. ...read more.