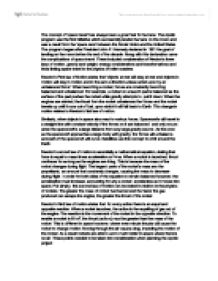 Relating the Physics of Rollercoasters to Space Travel

The concept of ‘space travel’ has always been a great feat for humans. The Apollo program was the first initiative which successfully landed humans on the moon and was a result from the ‘space race’ between the Soviet Union and the United States. The program began after President John F. Kennedy declared in 1961 the goal of landing on the moon before the end of the decade. Along with this declaration came the complications of space travel. These included consideration of Newton’s three laws of motion, gravity and weight, energy considerations and transformations and trials linking space travel to the physics of roller coasters.

Newton’s First law of Motion states that ‘objects at rest will stay at rest and objects in motion will stay in motion and in the same direction unless acted upon by an unbalanced force’. When launching a rocket, forces are constantly becoming balanced and unbalanced. For example, a rocket on a launch pad is balanced as the surface of the pad pushes the rocket while gravity attempts to pull it down.

Newton’s third law of motion states that for every action there is an equal and opposite reaction. When a rocket launches, the action is the expelling of gas out of the engine. The reaction is the movement of the rocket in the opposite direction. To enable a rocket to lift off, the thrust (action) must be greater than the mass of the rocket. This is different in space however, where even minute thrusts will cause the rocket to change motion. Moving through the air causes drag, impeding the motion of the rocket. As a result rockets are able to work much better in space where there is no air. These points needed to be taken into consideration when planning the Apollo project.

Gravity and weight are important considerations in space travel. Scientist has found that it was advantageous to launch rockets closer to the equator as the Earth rotates at a greater speed at the equator than at the poles. This is because the Earth is oblate (wider around the middle as it is not a perfect sphere).

Using the physics of roller coasters have assisted engineers and scientists in perfecting space travel. Concepts of roller coasters such as free fall and acceleration are all experienced during space travel. Feelings of low and high-gravity on rollercoasters have been designed to imitate turbulence, acceleration and free falls on air and spacecrafts. Modern technology has enabled the recreation of various gravitational conditions of space travel and vertical loops of a rollercoaster. Using these concepts, low-gravity research aircraft which fly in parabolic shaped paths have become available, enabling researchers to investigate the effect of microgravity on astronauts and conduct experiments to further increase knowledge on space travel.

It can therefore be concluded that the Apollo program which landed the first man on the moon was truly a great feat. Many complicated calculations and principles of physics needed to be accounted for in order to ensure its success, with information taken from various sources. Consequently, the Apollo program was also one of the most costly and intricate tasks of the time, made achievable by immense motivation.