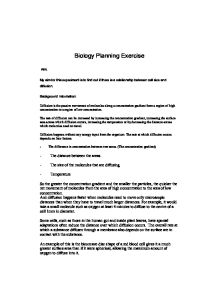 relationship between cell size and diffusion.

I would repeat the experiment with the four other cork borers recording these results in a table. I would also repeat the experiment twice to check the reliability of the experiment and to rule out any anomalies. Anomalies will be considered as results more than 10% away from the others which are the same size. Table of Results Diameter of agar (mm) Time taken for pink colour to disappear (seconds) Average time taken (Seconds) Attempt 1 Attempt 2 Attempt 3 Diagram Materials and apparatus * Agar with cresol red, (an indicator: red in alkali, yellow in acid) * HCl (Hydrochloric Acid), scalpels, tiles, boiling tubes, bungs, timers. Instructions: 1. Place the gelatine block on a tile and use a scalpel or razor blade to cut 2 cubes of 10 mm sides (2 x 1cm cube). 2. Keep one 10 mm cube intact and cut the other in half. 3. Repeat the cutting operation as shown in the flow chart to give five blocks of the dimensions shown (on our sheet). 4. Half fill a boiling tube with dilute Hydrochloric Acid (HCl). 5. Note the time, starting with the largest block, drop all the blocks into the tube of acid and close it securely with a bung. 6. Tilt the tube to spread the cubes out along its length. ...read more.

For example, a graph of the ratio of surface area to volume, clearly illustrates that as the size of an object increases (without changing shape), this ratio decreases. Mathematically, that tells us that the denominator (volume) increases faster relative to the numerator (surface area) as object size increases. The star on the line (at l = 6) represents the same point mentioned above: this is the size of the cube where S and V have equal values, and so the surface area to volume ratio is equal to one. Evaluation: This experiment is quite reliable as you can repeat it as often as you want and you get almost the same results. As we can see the results in each group were nearly equal. But you can notice that the end result of cube 1 (10x10x10) differs the most from those of the other groups, because we could not finish the experiment in the class. For this reason, we wrote down the average time of the complete diffusion for the acid into the middle of the biggest cube (advice of our biology teacher). Problems that could arise are for example the inexactly measurement of time for the acid's diffusion into the centre of the cube. It is difficult to watch the correct moment when this is happening. It could also be a difference in the size of the individual blocks, as we had to chop them up with a scalpel. It could have been occurred that the sizes of the blocks differed from group to group. ...read more.