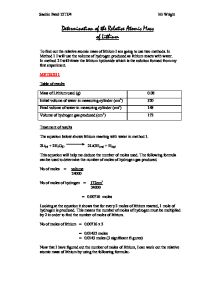 (Do not put back into jar because this will contaminate the whole chemical) Hydrochloric acid can be corrosive and cause burns. However the Hydrochloric acid being used in the experiment is diluted so it's not corrosive. 4. If some hydrochloric acid or distilled water is split on the floor, clear it up very quickly to prevent other people slipping over it and getting injured. 5. When putting hydrochloric acid into the burette, use a filter to prevent any spillages and therefore stop people slipping over it. Make sure you are not standing on a chair whilst pouring hydrochloric acid down the filter. If you cannot reach the filter, than use a sink instead of a table to pour the chemical into the burette. 6. Handle phenylethene with care by wearing gloves because it can be irritating to eyes and skin. EVALUATION As I did my experiment there were errors made. Firstly as I carried out method 1, it was difficult to remove all the oil from the lithium. Some oil may have stayed on the lithium during the experiment and caused error. To overcome this error I could use a tissue to wipe off all the oil on the lithium. If the lithium gets darker around the edges, than the edges can be chopped up in order to keep the lithium fresh. Also a non-polar solvent can be used to make sure there is no oil left on the lithium. ...read more.

This piece of equipment is easier to use and is more reliable because it doesn't allow any gas to escape and has a higher level of accuracy when taking down readings. On the other hand the measuring cylinder is harder to use due to it being used under a water bath and so the hydrogen gas is more likely to escape as it travels through the rubber tube into the measuring cylinder. I think the titration method was more accurate than the collecting hydrogen gas method. This is because when I was collecting my hydrogen gas, it was difficult for me to keep the conical flask in an upright position and therefore some gas may have escaped even if I had moved just a little bit. Also the gas that was produced when lithium had reacted with water was passed through rubber tubes. Some gas may have stayed in the tubes after the reaction had stopped causing error and unreliable results. On the other hand when I was carrying out my titration I had used a burette which didn't let any hydrochloric acid escape. However this method wasn't totally accurate due to the number of iodine drops added could have been to heavy or too light and the concentration of hydrochloric acid added to the lithium hydroxide using the burette could have been slightly too much. In conclude there were many areas for error in both methods (slightly more in method 1) but other than that the experiment was successful. ?? ?? ?? ?? Sachin Patel 12TU4 Mr Wright ...read more.