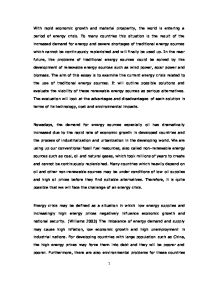 With rapid economic growth and material prosperity, the world is entering a period of energy crisis. To many countries this situation is the result of the increased demand for energy and severe shortages of traditional energy sources which cannot be continuously replenished and will finally be used up. In the near future, the problems of traditional energy sources could be solved by the development of renewable energy sources such as wind power, solar power and biomass. The aim of this essay is to examine the current energy crisis related to the use of traditional energy sources. It will outline possible solutions and evaluate the viability of these renewable energy sources as serious alternatives. The evaluation will look at the advantages and disadvantages of each solution in terms of its technology, cost and environmental impacts. Nowadays, the demand for energy sources especially oil has dramatically increased due to the rapid rate of economic growth in developed countries and the process of industrialization and urbanization in the developing world. We are using up our conventional fossil fuel resources, also called non-renewable energy sources such as coal, oil and natural gases, which took millions of years to create and cannot be continuously replenished. ...read more.

Lastly, as stated by Heinberg (2005, p. 153), there is a technical problem of low conversion efficiency that only about 20% of actual wind energy could be converted to electricity, but it might be solved in the near future. Solar energy, the power from the sun, has greater potential than wind power to become a major energy in the future, though it has not been fully developed. Direct sunlight has been used by humans for heating and drying for millennia. Nowadays, it can be directly used in solar thermal systems which collect sunlight through mirrors to heat a fluid in order to generate electricity. Several distinct types of solar thermal systems have been developed in many countries. The biggest breakthrough of sunlight use in twentieth century is photovoltaic (PV), which turns sunlight directly into electricity. PV has been used in space satellites and could be developed more for private use. Solar power is similar to wind power in that they both produce no harmful emissions and both are widely available. People can fix mirrors on the roofs of houses to collect sunlight for house and water heating, thus no additional spaces are required for installation. ...read more.

In other words, the net energy of biomass conversion could be considered zero. In conclusion there is an urgent problem of how to deal with the current energy crisis caused by increasing demand of energy (e.g. oil) and lack of energy supplies. Now, the renewable energy seems the best choice. Three main renewable energy sources were evaluated. Both wind power and solar power are widely available and produce no harmful emissions to air and water. However, they both have the problem of storage due to their intermittent availability. In addition, wind power is associated with noise, unpleasant visual effect and bird death, whereas, PV is linked to high price, radioactive materials and low energy conversion efficiency. Biomass is a more versatile source and easier to store. It also could indirectly benefit farmers and soil. Although it involves problems of air pollution and land use, biomass, compared to wind power and solar power, might be the simplest and cheapest source to produce energy. In the near future, other forms of renewable energy could be developed more. In a short term renewable energy is not a serious alternative of the traditional energy such as coal and oil; nevertheless, it is a long-term strategy for an energy crisis. Non-renewable energy could be eventually replaced by new forms of renewable energy which are more secure and sustainable. ...read more.