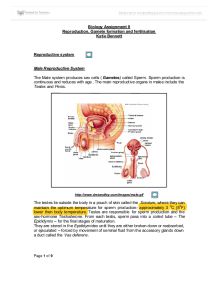 Biology Assignment 8 Reproduction, Gamete formation and fertilisation Katie Bennett Reproductive system Male Reproductive System The Male system produces sex cells (Gametes) called Sperm. Sperm production is continuous and reduces with age. The main reproductive organs in males include the Testes and Penis. http://www.drstandley.com/images/male.gif The testes lie outside the body in a pouch of skin called the Scrotum, where they can maintain the optimum temperature for sperm production- approximately 3 0C (50F) lower then body temperature. Testes are responsible for sperm production and the sex-hormone Testosterone. From each testis, sperm pass into a coiled tube - The Epididymis - for the final stages of maturation. They are stored in the Epididymides until they are either broken down or reabsorbed, or ejaculated - forced by movement of seminal fluid from the accessory glands down a duct called the Vas deferens. Inside the Male Scrotum http://www.zianet.com/nlynch/scrotum/testicle1.gif Scrotal Layers http://www.phyto-2000.co.uk/images/reproductive-system2.jpg Each testis is covered by a thin tissue layer, the Tunica vaginalis around which is a layer of connective tissue called Fascia. ...read more.

The follicle enlarges as its cell proliferates, and begins to fill with fluid, becoming a Secondary Follicle that moves to the ovary's surface. It also increases its production of the hormone oestrogen. A surge of Luteinizing Hormone (LH) causes the follicle to rupture and release the ripe egg - this is Ovulation. The lining of the empty follicle thickens into a Corpus- Luteum. http://cache-media.britannica.com.cdnetworks.net//eb-media/36/99236-004-770A8041.jpg Fertilisation Fertilisation is the term used to describe the exact moment when the Nuclei of the male and female gametes fuse. Each gamete contains half the full number of chromosomes, fertilisation creates a new cell with the full number of chromosomes this cell is called a Zygote. The Zygote contains two sets of chromosomes - one set from the male parent and the other from the female parent. Combining the genetic materiel from the two individuals makes offspring that are genetically Unique. http://members.optushome.com.au/karens/fertilisation.gif In humans, sperm are deposited high up in the female vagina close to the entrance of the cervix. ...read more.

This process is known as cleavage. http://sprott.physics.wisc.edu/pickover/zygote.jpg Morula The zygote divides several times to form a solid blackberry- like cluster of 16-32 cells, the morula (derived from the Latin for "Mulberry"). At 3-4 days after fertilisation the morula leaves the fallopian tube and enters the uterine cavity. http://blogs.discovermagazine.com/loom/files/prevsite/morula.gif Blastocyst About six days after fertilisation, the cell cluster forms a hollow cavity and is known as a Blastocyst. It floats within the uterus for around 48 hours before landing on the thick uterus lining (Endometrium), which softens to aid implantation (Burrowing of the Blastocyst into the Endometrium). The inner group of cells become the embryo itself. http://www.molecularstation.com/molecular-biology-images/data//504/thumbs/Blastocyst.jpg Embryonic disc Within the inner cell mass, an Embryonic disc forms. This separates the cell cluster into the amniotic cavity, which develops a sac that fills with fluid and fold around to cover the embryo, and the yolk sac, which helps to transport nutrients to the embryo during the second and third weeks. The disc develops three circular sheets called the primary germ layers-ectoderm, mesoderm and endoderm - from which all body structures will derive. http://www.citruscollege.edu/pic/46/0795l.gif http://cache-media.britannica.com.cdnetworks.net//eb-media/79/1079-004-38FAAFCC.gif ?? ?? ?? ?? Page 1 of 9 ...read more.

A well structured and comprehensive report on the stages and process of reproduction. Good use of images to illustrate and sub-headings to structure. However, some key A-level detail is omitted (i.e. the role of Meiosis)
To improve:
1)Explain the role of Meiosis in generating haploid gametes. This is essential fro reproduction to occur
2)Include biological terms such as haploid and diploid where relevant
3)Include brief detail about the role of stem cell differentiation in the development of the embryo
3)Include a reference list at the end