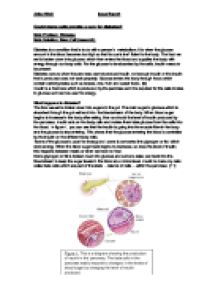 Research Project - Could stems cells provide a cure for diabetes?

Could stems cells provide a cure for diabetes? Main Problem: Diabetes Main Solution: Stem Cell (research) Diabetes is a condition that is to do with a person's metabolism; it is when the glucose amount in the blood becomes too high so that its use is inefficient to the body. The food we eat is broken down into glucose, which then enters the blood and supplies the body with energy through our body cells. For the glucose to be absorbed by the cells, insulin needs to be present. Diabetes occurs when the pancreas cannot produce insulin, not enough insulin or the insulin that is produced does not work properly. Glucose enters the body through foods which contain carbohydrates such as breads, rice, fruit and sweet foods. [9] Insulin is a hormone which is produced by the pancreas and it is required for the cells to take in glucose so it can be used for energy. What happens in diabetes? The food we eat is broken down into sugars in the gut. The main sugar is glucose which is absorbed through the gut wall and into the bloodstream of the body. When blood sugar begins to increase in the body after eating, then so should the level of insulin produced by the pancreas. Insulin acts on the body cells and makes them take glucose from the cells into the blood. In figure 1, you can see that the insulin is going into the muscle fibre in the body and the glucose is also entering. This shows that the glucose entering the blood is controlled by the insulin on the different body cells. Some of the glucose is used for energy and some is converted into glycogen or fat, which store energy. When the blood sugar level begins to decrease, so does the level of insulin, this happens between meals or when we have no food. ...read more.

Adult cells are easier to find in the body than embryonic cells and can be extracted from the body without any harm being done to the donor. Scientific Studies: 1: A small study involving 23 patients with newly-diagnosed type 1 diabetes was carried out in Brazil. Stem cell transplants work by 'resetting' the immune system so that the body stops attacking the pancreas. The researchers themselves say that this treatment can only be used when the condition is caught early enough before the pancreas has been damaged and before any complications from very high blood sugar have developed. This research was carried out by Dr Carlos EB Couri and other colleagues from the University Of Sao Paulo in Brazil. It was also conducted by Dr Richard K Burt from the Division of Immunotherapy North-western University Feinberg School of Medicine in Chicago. These researches were intrigued to find the effects of "autologous non- myeloablative hematopoietic stem cell transplantation". This is a type of cell transplantation where the stem cells that are extracted from the bone marrow are taken from the blood. [7] 2: Stem cells could be used to develop islet cells which are found in the pancreas and produce insulin. These cells could be used to treat people with diabetes thought islet cell transplants. Researches (Yale Professor Hugh S Taylor leading) placed endometrial stem cells in cultures that contain nutrients and factors for growth. The endometrial cells responded to this and gained characteristics of beta cells. Beta cells are cells in the pancreas of the body that produce and provide insulin to maintain glucose levels. The endometrial stem cells began to shape like the beta cells and also produce the same proteins, some even produce insulin. It was found that the stem cells began to produce insulin just like the beta cells. They injected the stems cells into diabetic mice that had a few working beta cells with high levels of glucose in their blood. ...read more.

This information is from http://stemcellresearchnews.net/. This website is reliable as it has many examples of where stem cells have been used in previous treatments, not only diabetes. This makes it reliable as we are able to see how stem cells work in other areas other than to treat patients with diabetes. The website also has other investigations carried out by other scientists and professors that show different aspects of how stem cells work, and whether they live up to the expectations that have been made over the years towards stem cells treatment. I think this source is very reliable and valid as it has investigations that were carried out many years ago such as the one i wrote about, as well as investigations/experiments that were carried out in 2011. This means that the website is continuously updated with new information - this is what makes it very valid in my opinion. Source [12] was very helpful when reading and understanding more about stem cells while writing this issue report. I gathered a lot of information that I did not already have, this enabled me to gain another view on how stem cells work and how they are able to treat certain diseases. This source was from http://www.news-medical.net/health/What-are-Stem-Cells.aspx. In my opinion, I think the source is quite reliable as it is a news website on different aspects of the medical world. I chose to evaluate this source as my opinions changed on the validity of it and how reliable it actually this. This is because I read that 'This article is licensed under the Creative Commons Attribution-ShareAlike License. It uses material from the Wikipedia article on "Stem cell" All material adapted used from Wikipedia is available under the terms of the Creative Commons Attribution-ShareAlike License. Wikipedia(r) itself is a registered trademark of the Wikimedia Foundation, Inc'. This changed my views as it is from Wikipedia. However, most of the information on this website was supported by other websites and they all had similar information and findings on the research of stem cells. Word Count: 3882 ?? ?? ?? ?? Anisa Shah Issue Report ...read more.

This is well-written essay which evaluates the potential therapeutic use of stem cells in the treatment of diabetes. The writer lays out clearly the underlying causes and symptoms of the two types of diabetes, before setting out to examine the different applications of stem cell technology to treating diabetes. Finally, the writer summarises briefly (perhaps a little too briefly) some of the ethical issues which must be addressed before the full potential of stem cell technology can be realised.
Overall, a very accomplished account of a fascinating area of modern medicine.