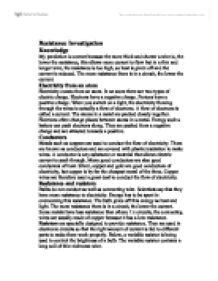 Resistance Investigation Knowledge My prediction is correct because the more thick and shorter a wire is, the lower the resistance, this allows more current to flow but in a thin and longer wire, the resistance is too high, so heat is given off and the current is reduced. The more resistance there is in a circuit, the lower the current. Electricity from an atom Electricity comes from an atom. In an atom there are two types of electric charge. Electrons have a negative charge. Protons have a positive charge. When you switch on a light, the electricity flowing through the wires is actually a flow of electrons. A flow of electrons is called a current. The atoms in a metal are packed closely together. Electrons often change places between atoms in a metal. Energy such a battery can push electrons along. They are pushed from a negative charge and are attracted towards a positive. Conductors Metals such as coppers are used to conduct the flow of electricity. There are known as conductors and are covered with plastic insulation to make wires. A conductor is any substance or material that allows electric current to push through. Many good conductors are also good conductors of heat. ...read more.

The voltage law has great practical utility in the analysis of electric circuits. It is used in conjunction with the current law in many circuit analysis tasks The electrical resistance of a material is defined as the ratio of the voltage applied to the electric current, which flows through it: If the resistance is constant over a considerable range of voltage, then Ohm's law, I = V/R, can be used to predict the behaviour of the material. Although the definition above involves DC current and voltage, the same definition holds for the AC application of resistors. Whether or not a material obeys Ohm's law, its resistance can be described in terms of its bulk resistivity. The resistivity, and thus the resistance, is temperature dependent. Over sizeable ranges of temperature, this temperature dependence can be predicted from a temperature coefficient of resistance Resistivity and Conductivity The electrical resistance of a wire would be expected to be greater for a longer wire, less for a wire of larger cross sectional area, and would be expected to depend upon the material out of which the wire is made. Experimentally, the dependence upon these properties is a straightforward one for a wide range of conditions, and the resistance of a wire can be expressed as The factor in the resistance, which takes into account the nature of the material, is the resistivity. ...read more.

Voltmeter/Ammeter Measurements The value of electrical resistance associated with a circuit element or appliance can be determined by measuring the voltage across it and the current through it and then dividing the measured voltage by the current. This method works even for non-ohmic resistances where the resistance might depend upon the current. Batteries A battery makes electrons move by conducting material between its terminals. Batteries use a chemical reaction to do work on charge and produce a voltage between their output terminals. Such voltages have historically been referred to as emf (electromotive force). Resistance in parallel Circuits Total resistance gets less when components are in parallel. When components are in parallel there are two (or more) routes for the electric current. This makes it easy for more current to flow out of the battery. 4. Components that do not obey Ohm's Law Some devices work in slightly different ways. a) Thermistor Thermistors have a lower resistance at higher temperatures. They let more current flow through them at higher temperatures b) LDR Light Dependent Resistor Light dependent resistors have lower resistance when there is more light. c) Diode A diode lets the current flow one way only, in the direction of the arrow. This means that it has a low resistance when the current is flowing in the direction of he arrow, but a very high resistance when the current tries to flow the other way. ...read more.