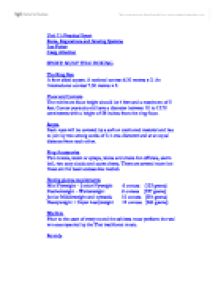 The minimum floor height should be 4 feet and a maximum of 5 feet. Corner posts should have a diameter between 10 to 12.70 centimetres with a height of 58 inches from the ring floor.

Each rope will be covered by a soft or cushioned material and has to join by two strong cords of 3-4 cms diameter and at an equal distance from each other.

Two towels, water or sprays, tables and chairs for officials, alarm bell, two stop clocks and score sheets. There are several more but these are the basic accessories needed.

Prior to the start of every round the athletes must perform the wai kru accompanied by the Thai traditional music.

A Muay Thai contest will consist of five rounds, three minutes each round with a two minute break between each round. Any stoppage during the contest for any reason will not be counted as part of the three minutes rounds.

All athletes will be certified by the doctor prior to the start of any contest and must not be suffering from any illness or any diseases as specified in the medical manual of the organisation.

The use of drugs or stimulants before or after the fight is forbidden.

A penalty area is defined at each end of the field: Two lines are drawn at right angles to the goal line, 16.5 m from the inside of each goalpost. These lines extend into the field of play for a distance of 16.5 m and are joined by a line drawn parallel with the goal line. Within each penalty area a penalty mark is made 11 m from the midpoint between the goalposts. An arc of a circle with a radius of 9.15 m from each penalty mark is drawn outside the penalty area.

A flagpost not less than 1.5 m high, without a pointed top and a flag is placed at each corner.

A quarter circle with a radius of 1 m from each corner flagpost is drawn inside the field of play.

Goals consist of two upright posts equidistant from the corner flagposts and joined at the top by a horizontal crossbar.

The distance between the posts is 7.32 m and the distance from the lower edge of the crossbar to the ground is 2.44 m.

Goals must be anchored securely to the ground. Portable goals may only be used if they satisfy this requirement.

Decisions of the international FA board

1. If the crossbar becomes displaced or broken the play is stopped until it has been repaired or replaced in position.

if the ball does not enter the goal, the kick is retaken

A team-mate of the player taking the kick enters the penalty area or moves in front of or within 9.5 m of the penalty mark:

A team-mate of the goalkeeper enters the penalty area or moves in front of or within 9.15 m of the penalty mark:

If, after the penalty kick has been taken: The kicker touches the ball a second time (except with his hands) before it has touched another player:

The kicker deliberately handles the ball before it has touched another player:

The ball is touched by an outside agent as it moves forward:

The ball rebounds into the field of play from the goalkeeper, the crossbar or the goalposts, and is then touched by an outside agent: