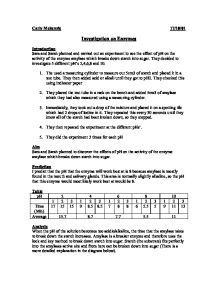 Sam and Sarah planned and carried out an experiment to see the effect of pH on the activity of the enzyme amylase which breaks down starch into sugar.

Carly Mckenzie 17/10/01 Investigation on Enzymes Introduction Sam and Sarah planned and carried out an experiment to see the effect of pH on the activity of the enzyme amylase which breaks down starch into sugar. They decided to investigate 5 different pH's 2,4,6,8 and 10. 1. The used a measuring cylinder to measure out 5cm3 of starch and placed it in a test tube. They then added acid or alkali until they got to pH2. They checked this using indicator paper 2. They placed the test tube in a rack on the bench and added 5cm3 of amylase which they had also measured using a measuring cylinder. 3. Immediately, they took out a drop of the mixture and placed it on a spotting tile which had 2 drops of Iodine in it. They repeated this every 30 seconds until they knew all of the starch had been broken down, so they stopped. 4. They then repeated the experiment at the different pHs'. 5. ...read more.

Starch (the substrate) fits perfectly into the amylases active site and from here can be broken down into sugar (There is a more detailed explanation in the diagram below). When the enzyme is placed in too acidic/alkaline conditions the active site denatures and the substrate no longer fits. My prediction was supported by my graph (on the opposite page) the lowest point on the graph shows the optimum pH which in this case was 8. Therefore my prediction was correct. Evaluation This experiment was reliable in the view that there only appeared to be 1 anomalous result which was 7.6 (min) at a pH 6 when it should've been 6.1 (min) this is shown on the line graph. This result may have been wrong because the experiment didn't utilize tools which were accurate enough such as: - * The universal indicator is not very accurate * It may not have been timed exactly every 30 seconds * Not all of the drops of Iodine ...read more.

This may have affected the accuracy of the end results i.e. the graph. The fact that the gap between the two numbers was so large (2 minutes) also shows how unreliable the experiment is. Sam and Sarah could extend this experiment by using all of the pHs' in the experiment not just the even numbers such as pH 1, 3, 5, 7, 9 etc. They could also extend the experiment further and investigate all pHs' from 7.0 to 9.0 e.g. 7.1, 7.7, 8.3 and 8.9 (obviously with the other pHs' in between) This will show whether the optimum pH is really 8.0 (it could be 7.9 or 8.1). I don't think that the evidence from this experiment is accurate enough to support a conclusion for the previously mentioned reasons. I think that is extremely likely to make mistakes, like I said beforehand the average wasn't 15.7 for that particular pH, this may have made major differences to a conclusion. ...read more.