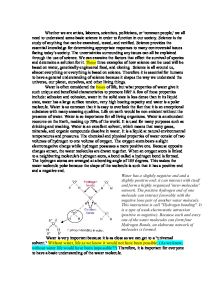 Whether we are artists, laborers, scientists, politicians, or 'common people,' we all need to understand some basic science in order to function in our society. Science is the study of anything that can be examined, tested, and verified. Science provides the essential knowledge for determining appropriate responses to many controversial issues facing today's society. The uncertainties surrounding any issues can all be explained through the use of science. We can examine the factors that effect the survival of species and determine a solution for it. These three examples of how science can be used will be based on water, genetically engineered food, and cloning. Science is all around us, almost everything or everything is based on science. Therefore it is essential for humans to have a general understanding of science because it shapes the way we understand the universe, our planet, ourselves, and other living things. Water is often considered the bases of life, but what properties of water give it such unique and beneficial characteristics to promote life? A few of these properties include: adhesion and cohesion, water in the solid state is less dense than in its liquid state, water has a large surface tension, very high heating capacity and water is a polar molecule. ...read more.

When genetic engineers insert new genes into any organism, it can lead to disruption and unpredictable changes in the pattern and structure of the new genetic function. Therefore, harmful substances may appear unexpectedly and can possibly create viruses and new dangerous diseases. Therefore, it is the obligation of experts to examine genetically modified products before making them available to the public in order to avoid undesirable diseases. A common example is, when some people who are allergic to certain kinds of food such as fish eat genetically modified products such as tomatoes, which were injected with genes similar to these fish, they get easily affected by allergens. (TOO BIG..shrink it) Also, genetically modified food might contain toxins, which may negatively affect human beings. An experiment run on rats by feeding them with Genetically modified potatoes affected their digestive tracks caused changes in some of their organ weights and caused adverse effects on their immune system. Such experiments show the importance of thoroughly examining genetically modified products and making sure of their safety on humans. In addition to that, there are long-term effects with reasons not yet identified. Genetically modified food is now entering the market with an increasing rate. Products include tomatoes, corn, potatoes and soybeans. A main problem is that the issue of labeling these products is not yet widely used. ...read more.

Cloning could certainly benefit couples that are infertile and want to have a child of their own, thus they could use cloning to produce a baby with their similar characteristics. In fact they may be able to even choose the characteristics of their child. Equally important women who are single could have child, using cloning instead of artificial insemination. Cloning could also provide a copy of a child for a couple whose child had died. Some people would suggest that cloning is unnatural and not ethically correct. However, cloning could be used in various ways to benefit the lives of humans. In conclusion, I would like to say that science has a profound effect on the way we live, largely through technology and the use of scientific knowledge for practical purposes in our daily lives. Water's unique physical and chemical properties allow it to act as the universal solvent. Cloning techniques have opened the door to curing incurable diseases, which also raises complex ethical questions. Genetically engineered food production methods are available to plants to ripen faster, improving the species taste and look, and providing third world countries with (???) healthier and cheaper. Science through different branches has allowed us to investigate almost everything that can be observed or detected, and science as a whole shapes the way we understand the universe, our planet, ourselves, and other living things. ...read more.