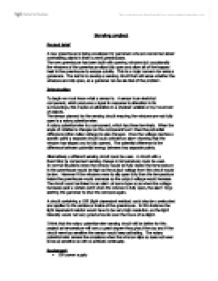 A new greenhouse is being developed for gardeners who are concerned about overheating plants in their current greenhouses.

The new greenhouse has been built with opening windows but occasionally the windows of the greenhouse slips fully open and allow all of the trapped heat in the greenhouse to escape quickly.  This is a major concern for serious gardeners.  The test is to develop a sensing circuit that will sense whether the windows are fully open, so a gardener can be alerted of the problem.

To begin we must know what a sensor is.  A sensor is an electrical component, which produces a signal in response to alteration in its surroundings, this maybe an alteration in a physical variable or by movement of objects.

The sensor planned for the sensing circuit ensuring the windows are not fully open is a rotary potentiometer.

A rotary potentiometer is a component, which has three terminals.  When the angle of rotation is changed on the component’s arm then the potential difference (often called voltage) is also changed.  Once the voltage reaches a specific point a separate circuit could activate an alarm showing that the window has slipped and is fully opened.  The potential difference is the difference between potential energy between two separate points.

Before results are firstly taken preliminary tests may be used to check that the circuit is working as expected.  When taking preliminary tests the power supply should only give the lowest input voltage as possible as it is unknown at this point how the rotary potentiometer react to higher voltages.  If the voltage is increased too high too quickly the rotary potentiometer may spark.  During the preliminary tests for example the voltmeter may be reading a negative result, which is easily resolved by swapping the wires connecting to the voltmeter’s terminals.  It is also important to ensure that the circuit does not short circuit.  It is possible that the crocodile clips connecting to the rotary potentiometer touch each other and alter the readings.  This can be avoided by placing a piece of paper between the two terminals.

As the readings are taken the rotary potentiometer arm with connected pointer (Lego piece) is rotated to certain degrees.  The maximum the windows could open to would be 1800 so points up to and including 1800 can be tested for voltage change.  Once certain the circuit is functioning and is safe to use then the voltage may be

Now with the information available the additional properties of the rotary potentiometer can be calculated.

This is the sensitivity at the beginning of the experiment

Sensitivity at the end of the experiment (N.B 1800 of rotation has not been used, as it is clearly an anomalies result)

So from these calculations we can see that the sensitivity has changed by 0.011 V 0-1 which was not what was predicted in the hypothesis, however this difference may be explained.

The resolution may now been found from the sensitivity values previously calculated.

This is the resolution at the end of the experiment.

Resolution at the beginning of the experiment.

As predicted in the hypothesis the resolution value remains constant throughout the experiment when using the more probable result for sensitivity at the beginning of the experiment.

This is an excellent piece of work and is five stars rating. Excellent introduction explains all options of investigating this problem and explains the choice of the rotary potentiometer clearly. Good predictions made and justified in detail. Good methods, diagrams and risks studied. Excellent results, calculations and conclusions. Work is presented in a very logical order and shows a good scientific understanding.