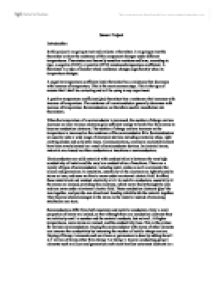 A negative temperature coefficient (ntc) thermistor has a resistance that decreases with increase of temperature. This is the most common type. This is the type of resistor that I shall be evaluating and will be using in my experiment.

When the temperature of a semiconductor is increased, the number of charge carriers increases as more valence electrons gain sufficient energy to break free from atoms to become conduction electrons. The number of charge carriers increases as the temperature is increased so the resistance of the semiconductor falls. Semiconductors are used to make a wide range of electronic devices including electronic chips, light emitting diodes and solid state lasers. Communications, commerce and entertainment have been revolutionised as a result of semiconductor devices.

Composite Thermistors can be custom-designed to match the electrical and thermal characteristics of gauges and probe housings.

The input signal may fluctuate or the sensor itself may generate noise. Small unsystematic variations are present in all experimental data. Their size limits the precision with which a measurement can be made. Taking an average over repeated measurements can improve the final result, as long as the conditions can be kept the same. This is why I took recordings when the thermistor was in an environment when the temperature was increasing and then decreasing, this gave me two sets of recordings which allowed me to check my results were correct.

Systematic error is very hard to detect, because detecting it means making another, even better, measurement. Systematic errors include zero error, and error due to disturbing influences, for example temperature. My experiment controlled the temperature and therefore this will not have been a factor.

Therefore I can conclude that my thermistor performed fairly well, this is because the results followed a pattern, my thermistor performed successfully because the response time was good, there was an unsystematic error when the multimeter reading was fluctuating and therefore I can conclude that my readings were fairly accurate.