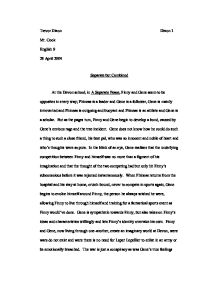 Trevor Dixon Dixon 1 Mr. Cook English 9 28 April 2004 Separate but Combined At the Devon school, in A Separate Peace, Finny and Gene seem to be opposites in every way; Phineas is a leader and Gene is a follower, Gene is mainly introverted and Phineas is outgoing and buoyant and Phineas is an athlete and Gene is a scholar. But as the pages turn, Finny and Gene begin to develop a bond, caused by Gene's envious rage and the tree incident. Gene does not know how he could do such a thing to such a close friend, his best pal, who was so innocent and noble of heart and who's thoughts were so pure. In the blink of an eye, Gene realizes that the underlying competition between Finny and himself was no more than a figment of his imagination and that the thought of the two competing had but only hit Finny's subconscious before it was rejected instantaneously. When Phineas returns from the hospital and his stay at home, crutch-bound, never to compete in sports again, Gene begins to evolve himself around Finny, the person he always wished he were, allowing Finny to live through himself and training for a fantastical sports event as Finny would've done. ...read more.

Dixon 3 With this statement, Gene noticed the flaws in his past character and vowed to take on the distinct characteristics of Phineas. The act of Gene adopting Finny's clothes on the outside coincides with the changes that happened now inside Gene. Gene realized that Finny was always more noble, courageous, and moral than he ever was and his attempt to be more like Finny started with these clothes. "So to Phineas I said, 'I'm too busy for sports,' and he went into his incoherent groans and jumble of words, and I thought the issue was settled until at the end he said, 'Listen, pal, If I can't play sports, you're going to have to play them for me,' and I lost part of myself to him then, and a soaring sense of freedom revealed that this must have been my purpose from the first: to become part of Phineas." (85) When Finny returns to Devon for the first time after his fall, Gene trains for the Olympics, as Phineas would've done. Gene lives out Finny's life for him, doing the things he can no longer do and in doing so they become one identity. During most of the novel, Finny's joke about the war being a sham is a veil kept over Gene and Finny's eyes clouding the thinking of Gene and Finny keeping them from the truth. ...read more.

He plunged out the doors." (177) Dixon 5 Having sheltered himself through all of the struggles in his relationship with Gene, Finny cannot bear the thought of his best friend deliberately putting him in harms way as he storms out of the mach-courtroom following Leper's speech. He has no peace left to hold on to. The shield that Gene and Phineas lived by their last two years at Devon did not allow the two to grow in maturity and develop themselves into individuals. Throughout the novel, feelings of security and contentment allow Finny and Gene to coexist as one unit, a symbiotic pairing of the two opposites. The two construct one identity, Finny living through Gene and Gene taking on Finny's characteristics and mannerisms. They exist, codependent with one another, for the greater part of the book in a lukewarm mixture of conversation and feelings. The two never completely delve into the deepness of their relationship until they were forced to at the end of the novel. This attachment to one another proves unhealthy at the end of the novel in the feelings of blankness in Gene and in the death of Finny. Having all of the cards out on the table showed how evil and deep their connection really had always been and how truly fit the two were to handle the truth of war and their relationship. ...read more.