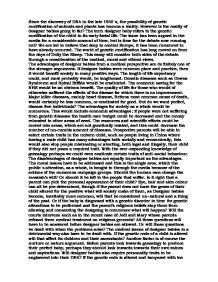 Since the discovery of DNA in the late 1950's, the possibility of genetic modification of animals and plants has become a reality. However is the reality of designer babies going to far?

Since the discovery of DNA in the late 1950�s, the possibility of genetic modification of animals and plants has become a reality. However is the reality of designer babies going to far? The term designer baby refers to the genetic modification of the child in its early foetal life. The issue has been argued in the media for a considerable amount of time, but is time for the debate now running out? We are led to believe that deep in central Europe, it has been rumoured to have already occurred. The world of genetic modification has long moved on from the days of Dolly the Sheep. This essay will consider both sides of the debate through a consideration of the medical, moral and ethical views. The advantages of designer babies from a medical perspective are definitely one of the stronger arguments. If designer babies were common place and practice, then it would benefit society in many positive ways. The length of life expectancy could, and most probably would, be lengthened. Genetic diseases such as Downs Syndrome and Spinal Biffida would be eradicated. ...read more.

The disadvantages of designer babies are equally important as the advantages. The moral issues have to be addressed and this is the single area, which the public�s attention, as a whole, is bought to through the media because of the actions of the numerous campaign groups. Should the human race change the messiah's will? Or should it be left to the people that suffer. Is it right that a parent can pick the personal appearance of their child? Eye, hair and skin colour can all be pre-determined, though if the parent does not have the genes of their child altered for the positive what will society make of them, as Designer babies become, inevitably more common, will that be considered un-natural and a thing of the past. Or if the baby is diagnosed with a genetic disorder in time for genetic alterations to be performed and the parent's religious beliefs stop them from allowing and consenting the designing to commence what will happen? Will the courts intervene such as in the recent case of Jodi and Mary whose parents refused them medical treatment on religious grounds? ...read more.

These are some fundamental questions that also relate to the reason why children develop the way they do? Can science over ride how a child is bought up? In conclusion I think that there are many good and positive things to come out of genetic modifications in designer babies, the idea of decreasing or even eradicating the number of genetic diseases is a very encouraging one, though with every good things come a bad thing. The consequences of designer babies can only be predicted in theory, but will theory support a test number of people born with every genetic disorder known to man or are all genetic disorders-orders known to man? I think to allow designer babies legally would be very easy looking the positive aspects alone, though put along sides together the more questions are needed to be answered. I think in my opinion designer babies should not be allowed until all the questions have been answered and this will take along time. Until then I think we will have to wait and see what the Government have to say. Or possibly a photograph of the first designer baby? ...read more.