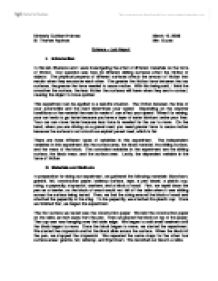 In this lab, Shannon and I were investigating the affect of different materials on the force of friction.  Our question was how do different sliding surfaces affect the friction of objects.  The physical property of different surfaces affects the amount of friction that results when they encounter each other.  The greater the friction force between the two surfaces, the greater the force needed to cause motion.  With this being said, I think the smoother the surface, the less friction the surfaces will have when they are in contact, causing the object to move quicker.

This experiment can be applied to a real-life situation.  The friction between the tires of your automobile and the road determines your speed.  Depending on the weather conditions or the material the road is made of, can affect your speed.  When it is raining, your car tends to go faster because you have a layer of water lubricant under your tires.

The first surface we tested was the construction paper.  We laid the construction paper on the table, an inch away from the pen.  Then we placed the block on top of the paper.  The cup was now hanging over the table edge.  We began to add small washers until the block began to move.  Once the block began to move, we started the experiment.  We started the stopwatch and let the block slide across the surface.  When the block hit the pen, we stopped the stopwatch.  We repeated the same steps for the other four surface areas: granite, felt, tabletop, and Styrofoam.  We recorded our data in a table.

Before beginning our experiment, we attached a plastic cup to the block of wood and added washers to it.  The washers acted as weights.  Beforehand, we weighed one washer to get the weight.   Each washer weighed 15.1 grams.  After calculating the weight

This experiment was applied to real-life.  It was proven my theory was correct.  The friction between the tires of your automobile and the road determines your speed.  Depending on the weather conditions or the material the road is made of, can affect your speed.  When it is raining, your car tends to go faster because you have a layer of water lubricant under your tires.  Your car can move faster because less force is needed for the car to move.  On the hand, when you are driving on a gravel road, you need greater force to cause motion because the surface is not smooth as asphalt paved road, which is flat.