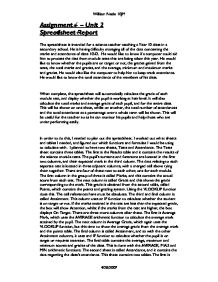 Assignment 4 - Unit 2 Spreadsheet Report The spreadsheet is intended for a science teacher teaching a Year 10 class in a secondary school. He is having difficulty managing all of the data concerning the marks and attendance of class 10X2. He would like to know if a computer could aid him to process the data from module tests that are being taken this year. He would like to know whether the pupils are on target or not, the grades gained from the tests, the total marks and grades, and the average, minimum and maximum marks and grades. He would also like the computer to help him to keep track attendance. He would like to know the total attendance of the members of his class. When complete, the spreadsheet will automatically calculate the grade of each module test, and display whether the pupil is working at heir level. It will also calculate the total marks and average grade of each pupil, and for the entire class. This will be shown on one sheet, whilst on another, the total number of attendances and the total attendance as a percentage over a whole term will be shown. This will be useful for the teacher so as he can monitor his pupils and help those who are under performing easily. In order to do this, I needed to plan out the spreadsheet. ...read more.

A graphical plan is shown on the previous page. In order to make the database work, data is needed. The data needed for the first sheet are the surnames and forenames of the pupils, their expected marks, the marks obtained in the four module tests, and the marks needed to obtain each different grade. The second sheet requires the pupil's surnames and forenames, their attendances, and the dates of the lessons. The data would be obtained from the science teacher himself, but as he does not really exist, I shall have to create the data myself. Once I had created all of the data, I started to set up my spreadsheet. I started up the spreadsheet program we have at school, Microsoft Excel 2000. A new workbook was automatically created, so I saved it to M drive as ssproject.xls. My first task was to rename the sheets. To do this, I right-clicked on the tab at the bottom of the screen called Sheet1. The menu to the left came up, and I clicked on rename. I could now type in the new name for the sheet, Tests. I then repeated this for Sheet2, renaming it Attendance. I then deleted Sheet3, as I had no use for it. The tabs at the bottom of the screen now looked like this. I then started to construct the tables. ...read more.

Once this was done, I needed to set-up the grid lines that would make the sheets easier to read and more professional. To do this, I selected the cells, which I wished to have lines dividing them. I then clicked on the gridline button on the toolbar, and selected the type of gridlines that I wanted. The ones that were the most suitable were the ones shown selected in the screenshot above. This put gridlines on the borders of each cell in the selection. One I had done this a few times, due to the shape of my table, the sheet looked like the screenshot below. I repeated adding the grids for the Attendance table. With the layout mostly complete, I could now begin to add the data. I entered the expected marks, as shown to the left, in the column labelled Expected. I then entered the marks that each pupil had received in heir tests, in the columns labelled marks, as shown to the right. My attention was next focussed to the VLOOKUP functions in the Grade column. In order for this to work. I needed to set up a points table. I typed a bold, underlined title a few cells underneath the Results table. Below this, I set up a two by seven grid, with gridlines. The cells were formatted, by going into Format>Cells>Alignment, to be centred horizontally and vertically. The grades were entered into the right hand column in ascending order, as were the corresponding required marks in the left hand column. William Neale 10JM 4/28/2007 ...read more.