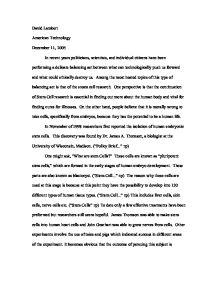 David Lambert American Technology December 11, 2005 In recent years politicians, scientists, and individual citizens have been performing a delicate balancing act between what can technologically push us forward and what could ethically destroy us. Among the most heated topics of this type of balancing act is that of the steam cell research. One perspective is that the continuation of Stem Cell research is essential in finding out more about the human body and vital for finding cures for illnesses. On the other hand, people believe that it is morally wrong to take cells, specifically from embryos, because they has the potential to be a human life. In November of 1998 researchers first reported the isolation of human embryonic stem cells. This discovery was found by Dr. James A. Thomson, a biologist at the University of Wisconsin, Madison. ("Policy Brief..." np) One might ask, "What are stem Cells?" These cells are known as "pluripotent stem cells," which are formed in the early stages of human embryo development. These parts are also known as blastocyst. ("Stem Cell..." np) The reason why these cells are used at this stage is because at this point they have the possibility to develop into 130 different types of human tissue types. ("Stem Cell..." np) This includes liver cells, skin cells, nerve cells etc. ("Stem Cells" np) ...read more.

(Stem Cell... np) There are many issues to consider when we think about stem cell research. It is important that we look at ethical issues to consider the potential moral outcomes of stem cell technologies, the legal issues that discuss how stem cell technologies should be regulated by the government, and also how this issue can impact society as a whole. ("What Are..." np) Controversy exists because those cells are obtained from destroyed embryos. This raises similar concerns as those surrounding abortion. ("Stem Cell..." np) The most prominent global opponent of this research is the church, specifically Catholics, who constantly ask President Bush to not support funding for this research. ("Stem Cell..." np) On August 9, 2001 President Bush stated that the Administration will not support continued funding for research on Stem Cell lines that have already been abstracted and that the number of cell lines that already have been found are adequate for current research purposes. ("Stem Cell..." np) Only recently has this been turned into a political issue. In the 2001 and 2004 elections candidates discussed and debated the pros and cons of this type of research that was mostly separated by party lines. ("Policy Brief..." np) Democrats generally tend to support funding of this new technology for technology research purposes while the Republican Party is divided on the issue. ...read more.

np) There are many questions to ponder when thinking about stem cell research. For example: How far should researchers take stem cell technologies? In this new field of research it seems as if all the lines and boundaries are blurred. It is imperative that a happy median be maintained between technological advancement and ethical preservation. Yet, another question is should the government provide funding for embryonic stem cell research? This is one inquiry that is hard to answer. I find it hard for the government to fund such a project that so many people disagree with. I think that at least a strong majority of the people should be in favor of something before the government decides to use their tax money to support it. Although, it would be a good principle for the public to support what their tax money goes towards it is rarelythe case. However, it is important that if this research is funded in the future that the government provides strict laws to regulate stem cell research. There is no doubt that without regulations on such a project as this that things could get out of hand. It becomes overwhelmingly apparent that technology will continue to expand throughout the years to come. However, one question will remain: How will moral implications effect how innovative technology is used? ...read more.