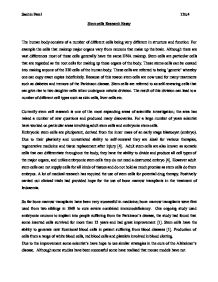 Stem cells Research Essay The human body consists of a number of different cells being very different in structure and function. For example the cells that makeup major organs vary from neurons that make up the brain. Although there are vast differences most of these cells generally have the same DNA makeup. Stem cells are particular cells that are regarded as the root cells for making up these organs of the body. These stems cells can be coaxed into making anyone of the 220 cells of the human body. These cells are referred to being 'generic' whereby one can copy exact copies indefinitely. Because of this reason stem cells are now used for many treatments such as diabetes and tremors of the Parkinson disease. Stem cells are referred to as self-renewing cells that can give rise to two daughter cells when undergone mitotic division. The result of this division can lead to a number of different cell types such as skin cells, liver cells etc. Currently stem cell research is one of the most expanding areas of scientific investigation; the area has raised a number of new questions and produced many discoveries. ...read more.

Married couples that unfortunate to have normal pregnancies are able to have in-vitro fertilisation using the husband's sperm. The technique was first successful in 1978 and now approximately one in eighty babies is born through IVF. This issue shall be considered as if the embryo which is formed within a few days after an artificial fertilisation is known as a human being. I believe an embryo is very valuable and has every potential to grow into a human being, but is not yet considered as a human being. There is a big difference between an embryo in the body of a human and an embryo in a dish that has been developed initially in a laboratory. Yes, the embryo in the human being will become into life and if it's destroyed inside the body then this will be abortion. However, having an excess of embryos in a dish ready for reproduction is a different story. This is because no one treats these embryos as humans and the remaining embryos will be frozen or destroyed. On the other hand, if these embryos were treated as humans, than it would have been prohibited to produce them in access and to demolish them later. ...read more.

Finally in conclusion although there are a considerable number of problems stem cell research has faced but with the techniques used so far and forth coming technology it may be hopefully possible to develop new advance therapies for serious diseases which have not been researched yet. The religious views from a number of cultures I feel is completely reasonable, I believe cells are our structural and functional building blocks of life they should be used for beneficial transplantation uses. Stem cells should be used for only therapeutic uses (treatment of birth-defects, diabetes, spinal cord injuries, burns and cardiac disease) and not for research with no purpose. I believe embryonic stem cells should be available in limits and be used for good reasons such as treating diseases and giving the opportunity for a couple to have a baby. Scientists should ensure there is consent from the donors and safeguards against financial compensation to embryo donors are provided. Further research on stem cells I believe should be encouraged but with improved isolation methods. It is also to promote the research on alternative adult stem cells instead of only using embryonic stem cells. Using adult stem cells have less controversy, thus they may not hold as much promise as embryonic stem cells. ?? ?? ?? ?? Sachin Patel 12tu4 ...read more.