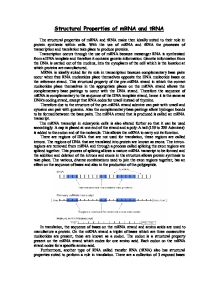 Structural Properties of mRNA and tRNA

Structural Properties of mRNA and tRNA The structural properties of mRNA and tRNA make then ideally suited to their role in protein synthesis within cells. With the use of mRNA and tRNA the processes of transcription and translation take place to produce proteins. Transcription occurs through the use of mRNA because messenger RNA is synthesised from a DNA template and therefore it contains genetic information. Genetic information from the DNA is carried out of the nucleus, into the cytoplasm of the cell which is the location at which proteins are manufactured. MRNA is ideally suited for its role in transcription because complementary base pairs occur when free RNA nucleotides place themselves opposite the DNA nucleotide bases on the reference strand. This structural property of the pre-mRNA strand in which the correct nucleotides place themselves in the appropriate places on the mRNA strand allows the complementary base pairings to occur with the DNA strand. Therefore the sequence of mRNA is complementary to the sequence of the DNA template strand, hence it is the same as DNA's coding strand, except that RNA codes for uracil instead of thymine. ...read more.

The various, diverse combinations used to join the exon regions together, has an effect on the sequence of bases and also in the production of the polypeptide. In translation, the sequence of bases on the mRNA strand and amino acids are used to manufacture a protein. On the mRNA strand a triplet of bases which are three consecutive nucleotides are present, these are known as a codon. The codon is a structural property present on the mRNA strand which codes for one amino acid. Each codon on the mRNA strand codes for a specific amino acid. Furthermore, another type of RNA called transfer RNA (tRNA) also has structural properties suited to perform a role in translation. There are a collection of 3 exposed bases called anti-codons which is a single-stranded loop on each type of tRNA. These anti-codons on the tRNA strand allow complementary base pairings to occur between themselves and the codons on an mRNA strand. The tRNA molecule also has another important structural property which is a binding site on its opposite side. ...read more.

For example if the mRNA codon is UAA then the anticodon will be AUU. Furthermore due to the complementary base pairings a peptide bond is formed between the two amino acids from the two tRNA molecules when they are joined together with the aid of a condensation reaction and energy provided from ATP. The mRNA travels through the ribosome, and exposes a third codon. This is done so that a third anticodon from a tRNA molecule can bind to it and consequently this allows another amino acid to become attached to the chain of amino acids. Nevertheless, the first tRNA molecule, which had the first amino acid, detaches itself from its complementary mRNA codon and leaves the amino acid behind. The tRNA molecule does this to its structure so that it can now be released and it can merge itself with another amino acid. This cycle carries on in this manner along the mRNA strand due to the structural properties of tRNA and mRNA until a polypeptide chain is formed. At the end of the mRNA strand, the stop codon (UAA) is present which is an indicator to show that the polypeptide is released at this point. ...read more.