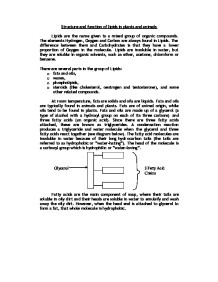 Structure and function of lipids in plants and animals

Structure and function of lipids in plants and animals Lipids are the name given to a mixed group of organic compounds. The elements Hydrogen, Oxygen and Carbon are always found in Lipids. The difference between them and Carbohydrates is that they have a lower proportion of Oxygen in the molecule. Lipids are insoluble in water, but they are soluble in organic solvents, such as ether, acetone, chloroform or benzene. There are several parts in the group of Lipids: o fats and oils, o waxes, o phospholipids, o steroids (like cholesterol, oestrogen and testosterone), and some other related compounds. At room temperature, fats are solids and oils are liquids. Fats and oils are typically found in animals and plants. Fats are of animal origin, while oils tend to be found in plants. Fats and oils are made up of a glycerol (a type of alcohol with a hydroxyl group on each of its three carbons) and three fatty acids (an organic acid). Since there are three fatty acids attached, these are known as triglycerides. A condensation reaction produces a triglyceride and water molecule when the glycerol and three fatty acids react together (see diagram below). ...read more.

They tend to be more characteristic of plants, particularly in oily seeds and fruits, such as castor oil seeds, sunflower seeds and coconuts. Oils can be found in some animals, though, for example the fish liver oils of cod and halibut, and in red fish such as sardines, pilchards, mackerel, salmon, tuna, eels and trout which are referred to as "oily fish". Olive oil is formed when glycerol combines with oleic acid (a type of unsaturated acid). Linolenic and linoleic acids (more unsaturated acids) combined with glycerol are found in linseed oil and in corn oils. They are both examples of "essential fatty acids" which are acids necessary for normal health, but in small quantities and these cannot be made by the body. Waxes are the esters of fatty acids with long chain alcohols such as cetyl alcohol (CH16H33OH). They are rigid and form protective water-resistant coverings on biological surfaces, for example, the cuticle of arthropod exoskeletons, leaf surfaces, fruits, seeds, mammalian skin, fur, feathers. Beeswax is used to construct honeycombs of bees. Lanolin is a waxy substance that coats mammalian hair. Phospholipids are made from glycerol, two fatty acids, and (in place of the third fatty acid) ...read more.

Unsaturated fats are better to have in our diets, because they help to lower our cholesterol levels in the blood. Lipoproteins are the combination of proteins and water soluble lipids. These act as a means of carrying lipids, including cholesterol, around in our blood. There are two main categories of lipoproteins distinguished by how compact/dense they are: o The first type is Low Density Lipoproteins or LDLs. They are bad because they transport cholesterol into the blood system and lay it inside the cells and on the walls of arteries. This increases the cholesterol levels in the blood and therefore increases the risk of coronary heart disease. o The second type is High Density Lipoproteins or HDLs. They are better because they transport cholesterol out of the system into the liver, where it can be excreted. Therefore, they decrease the cholesterol levels and help the body stay healthier. A good source of HDLs is Red (oily) fish. By taking in unsaturated fatty acids known as omega-3 fatty acids, the risk of getting heart disease is lowered, because the cholesterol levels will decrease. Omega-3 fatty acids are found in oily (red) fish and in shellfish, these acids should be included in a good healthy diet, as will keep the body healthier. By Nayan Patel ...read more.