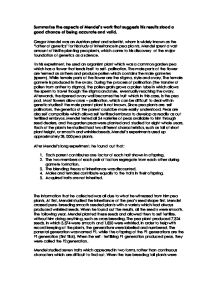 Summarize the aspects of Mendel(TM)s work that suggests his results stood a good chance of being accurate and valid.

Summarize the aspects of Mendel's work that suggests his results stood a good chance of being accurate and valid. Gregor Mendel was an Austrian priest and scientist, whom is widely known as the 'father of genetics' for his study of inheritance in pea plants. Mendel spent a vast amount of his life planting pea plants, which came to his discovery of the major foundation of genetics as a science. In his experiment, he used an organism plant which was a common garden pea which has a flower that lends itself to self- pollination. The male parts of the flower are termed as anthers and produce pollen which contains the male gametes (sperm). While female parts of the flower are the stigma, style and ovary. The female gamete is produced in the ovary. During the process of pollination (the transfer of pollen from anther to stigma), the pollen grain grows a pollen tube in which allows the sperm to travel though the stigma and style, eventually reaching the ovary. ...read more.

4. Males and females contribute equally to the traits in their offspring. 5. Acquired traits are not inherited. The information that he collected was all due to what he witnessed from him pea plants. At first, Mendel studied the inheritance of the pea's seed shape first. Mendel crossed pure- breeding smooth seeded plants with a variety which had always produced wrinkled seeds. When he found out the results, all the seeds were smooth. The following year, Mendel planted these seeds and allowed then to self fertilize, without him doing anything, such as cross breeding. The pea plant produced 7,324 seeds, in which 5,574 were smooth and 1,850 were wrinkled. In order to help with record keeping of the plants, the generations were labelled and numbered. The parental generation was named P1, while the offspring of the P1 generations are the F1 generation (first filial). When the self- fertilizing F1 generation produced peas, they were called the F2 generation. Mendel studied seven traits which appeared in two forms, rather than continuous characters which are difficult to find out. ...read more.

The trait not shown in the F1 reappeared in the F2 in about 25% of the offspring. 4. Traits remained unchanged when passed to offspring: they did not blend in any offspring but behaved as separate units. 5. Reciprocal crosses showed each parent made an equal contribution to the offspring. Mendel's Conclusions: 1. Evidence indicated factors could be hidden or unexpressed, these are the recessive traits. 2. The term phenotype refers to the outward appearance of a trait, while the term genotype is used for the genetic makeup of an organism. 3. Male and female contributed equally to the offspring's' genetic makeup: therefore the number of traits was probably two. 4. Upper case letters are traditionally used to denote dominant traits, lower case letters for recessives. The reason why Mendel's experiment is completely valid and accurate is because he used variety in order to find out the conclusion. For example, he used many pea plant varieties instead of just one. He also used selective breeding and natural breeding for the plants to show different types of genetic varieties. In addition, the breeding occurred during a very long period of time which helped to make his conclusion concrete and secure. ...read more.