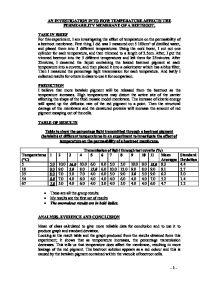 Cholesterol role is different compared to protein and phospholipid, its role is to give the membrane support and strength. Cholesterol determines how fluid the membrane is. It helps to control the fluidity; stopping it from becoming too fluid or too rigid, preventing the membrane from bursting. Cholesterol structure is very similar to a phospholipid; it too has a hydrophilic head and hydrophobic tale, which allows it to fit neatly in the phospholipids. Glycolipids and glycoproteins role is to help stabilise the membrane, with their carbohydrate chains that extend out into the water surface forming hydrogen bonds with the water molecules. Lastly, the lower the temperature the more light is transmitted because less concentrated betalain pigment is produced due to the membrane been not very permeable. And for the higher temperature, the less light is transmitted because more concentrated betalain pigment is produced due to the membrane been more permeable. Since the lipid bi layer gives the membranes its fluid characteristics. And at low temperatures, the bi layer is in a gel state and tightly packed. But at high temperatures the bi layer "melts' and the interior becomes fluid allowing the lipid molecules to move around, rotate and exchange places. This also allows movement of other components of the membrane. And this fluidity in the membrane has caused a great leakage of the betalain pigment in the beetroot's membrane. EVALUATION The procedure is suitable because I obtained the result I expected i.e. as temperature increases, the membrane becomes more permeable. The equipment used are mostly accurate (e.g. the water baths), because it allowed us to carry out the experiment in an expected way. The prediction does however matches with the results derived from the experiment, which concludes that high temperatures does makes the membrane more permeable due to the membrane becoming more fluid. The two anomalous results for 5�C is 16% and 18% light transmission. ...read more.

2. Some part of the cell membrane were damaged during cutting, resulting in some betalain pigment been leaked. And some f us will have more damaged or leaked betalain pigments than others which shows to be an error. Blot the beetroot out before inserting it into the distilled waters. This will remove any betalain pigment already leaked. If all leakage is wiped clean, then more precise results will be obtained because there isn't any betalain pigment in the water before the real damage occurs to the membrane. Numbers is used to rank the error in accordance to how each limitation will have the most or the least impact on the experiments. 1 for most and 7 for least. Overall, the evidence is quite reliable in showing that higher temperature does have an effect on the permeability of a beetroot's membrane. The main source of error is using a wide range of temperatures. The temperatures used for this experiment are too widely spread i.e. from 5�C to 18�C to 35�C etc. if a closer range of temperatures is used, then the result would have been more reliable than it is. Another main source of error is not blotting out the beetroot to remove leaked betalain pigments before putting it in distilled water. This is because the membrane is already damaged, and blotting it out removes all leaked pigment, this means more precise results will be obtained. An error with the least impact is the straightness of the beetroot because we are not measuring how straight the beetroot is, but how easily permeable the membrane of the beetroot is. Straightness does not have much of an impact on the permeability of a beetroot's membrane. If all improvements is taken into use when doing this experiment again, then the result obtained will be far accurate than the one I have now. Finally, the beetroot gives a good representation of the theories behind the plasma membrane and how it behaves but it does not give a good representation of the whole eukaryotic group because their behaviour may differ to others. ?? ?? ?? ?? - 1 - ...read more.