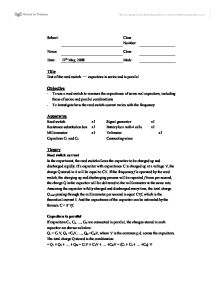 Test of the reed switch capacitors in series and in parallel

Test of the reed switch ─ capacitors in series and in parallel

Assuming the capacitor is fully charged and discharged every time, the total charge

Q total passing through the milliammeter per second is equal CVf, which is the theoretical current I.

Therefore, the equivalent capacitance C of the combination

In the experiments, the current measured increases when the frequency of the signal generator increases form 100Hz to 400Hz, holding the p.d. across the capacitor and resistance of the variable resistor constant.

When the p.d. across the capacitor and the capacitance of the capacitor remains constant, the frequency of the signal generator is directly proportional to the current.

The writer has done a good job of answering the question set and as a result produced a good report. ...

The writer has done a good job of answering the question set and as a result produced a good report. They started off with a preliminary investigation which involved going through the theory of the experiment. The evaluation could have gone into more detail, which would include all the good parts of their experiment and what could have been thoroughly improved. Although the writer had an improvement section, this in general could have gone into more detail and relate these evaluations to the original experiment. It's worth noting that when drawing graphs, by you doing it in a computer program such as Microsoft Excel compared to doing it by hand, you loose a lot of precision and therefore could have a less accurate quantity. I would say using a program such as QTIPlot where you are able to calculate the PMCC and add error bars would be more suitable. The layout is okay, however it could be fixed so that it flows better on the page. In terms of procedure and apparatus, although the writer did write these clearly they should also discuss as to why each piece of equipment is suitable for taking certain measurements. The diagram was very good. They could mention all potential errors within the experiment before actually carrying it out, and mention this within their evaluation to see if these predictions were correct. They could have in addition mentioned any predictions in general before carrying out their experiment when the writer was talking about the theory behind the experiment.

Level of analysis - To what extent does the writer show appropriate analytical skills for this level of qualification? Have they made evaluative judgements using suitable evidence? Have these examples been developed throughout the response and has an appropriate conclusion been reached?

Physics content is generally correct. Should use SI Units to show understanding of measurements. The writer could discuss precision and accuracy in more detail. As mentioned before, the graph being done by hand would have made results more valid.

Quality of writing - Is the writing accurate in terms of spelling, grammar and punctuation? Has the writer used technical terms expected at this level of qualification? To what extent does the writer follow conventions and expectations for written work at this level?

Spelling and grammar relatively good. Layout however didn't flow very well. This was noticed when reading the apparatus and when the data was not all in tables. If you put all the data collected into tables and the apparatus in a bullet pointed listed, it will make the layout flow better.