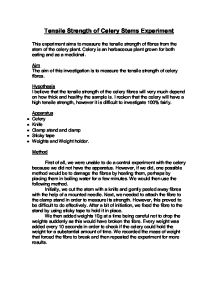 Testing the tensile strength of celery

Next, we needed to attach the fibre to the clamp stand in order to measure its strength. However, this proved to be difficult to do effectively. After a bit of initiation, we fixed the fibre to the stand by using sticky tape to hold it in place. We then added weights 10g at a time being careful not to drop the weights suddenly as this would have broken the fibre. Every weight was added every 10 seconds in order to check if the celery could hold the weight for a substantial amount of time. We recorded the mass of weight that forced the fibre to break and then repeated the experiment for more results. Results Fibre Mass required to break (g) Force (N) ...read more.

Suggesting that the fibres we used from the plant had different cell compositions. However, handling the fibres quite a lot when fixing them to the clamp stand may have damaged the fibres, therefore the experiment may not be entirely reliable. We were unable to do a control for this experiment, as there was not a suitable experiment, which would measure what we needed. Evaluation All the results we collected were fairly similar; therefore we deemed the investigation pretty successful. We only used fibres that appeared to be healthy. We could have made this experiment more valid and reliable by doing a control, using smaller weights to ensure more accurate results and by repeating the experiment more times with making sure we used fibres from the same strand of celery ensuring a similar cell composition. ?? ?? ?? ?? ...read more.

Overall a very basic essay format. The response to the question was adequate for the most part, although the hypothesis stated was completely wrong compared to what the candidate actually investigated. The candidate also lacked scientific reasoning and depth behind ...

Overall a very basic essay format. The response to the question was adequate for the most part, although the hypothesis stated was completely wrong compared to what the candidate actually investigated. The candidate also lacked scientific reasoning and depth behind a lot of the experiment. A conclusion was also not included, and the evaluation did not suggest improvements to the experiment.

Inconsistent use of full stop and capital letters in the listing of apparatus. Makes the essay look untidy. Other spelling, grammar and punctuation are all okay.