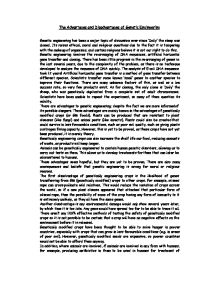 The Advantages and Disadvantages of Genetic Engineering.

The Advantages and Disadvantages of Genetic Engineering Genetic engineering has been a major topic of discussion ever since 'Dolly' the sleep was cloned. Its raises ethical, moral and religious questions due to the fact it is tampering with the makeup of organisms, and certain religions believe it is not our right to do this. Genetic engineering involves the re-arranging of DNA sequences, artificial horizontal gene transfer and cloning. There has been little progress in the re-arranging of genes in the last several years, due to the complexity of the problem, as there is no technique developed to analyse the sequence of DNA quickly. The analysis of E-coli DNA sequence took 12 years! Artificial horizontal gene transfer is a method of gene transfer between different species. Scientists transfer some known 'small' genes to another species to improve their functions. ...read more.

Genetically engineering crops can also increase the shelf life our food, reducing amounts of waste, as products will keep longer. Animals can be genetically engineered to contain human genetic disorders, allowing us to carry out tests on them. This allows us to develop treatments for them that can later be administered to humans. These advantages seem hopeful, but they are yet to be proven. There are also many consequences and beliefs that genetic engineering is wrong for moral or religious reasons. The first disadvantage of genetically engineering crops is the likelihood of genes transferring from GM (genetically modified) crops to other crops. For example, oilseed rape can cross-pollinate wild relatives. This would reduce the variation of crops across the world, so if a new plant disease appeared that attacked that particular form of oilseed rape, then the possibility of some of the crop having any form of immunity to it is extremely unlikely, as they all have the same genes. ...read more.

This should not be a risk we are willing to take. Another argument is that the manipulation of plant and animal DNA could be leading to the genetic manipulation of humans, which would cause a public outcry. Should we be allowed to tamper with genetic make-up when it has progressed without interruption from humans for billions of years? Religious people believe we should not tamper with what god created. Should we be carrying out research into an area many people feel strongly against? These are the kinds of moral questions we should consider before we take this any further, although scientists are proceeding with research without fully considering the beliefs of other people, believing they are doing is right. Surely we should be seriously considering the implications of our actions involving genetic engineering, as the next breakthrough could be tomorrow. ...read more.