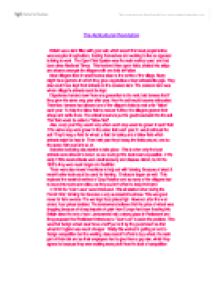 The Agricultural Revolution Britain was a land filled with good soil, which meant that most people's time was occupied in agriculture, feeding themselves and working to live as opposed to living to work. The Open Field System was the main method used and had been since Medieval Times. This involved three open fields, divided into strips and shared amongst the villagers with one field left fallow. Most villagers lived in small homes close to the centre of the village. Many might have gardens in which they grew vegetables or kept animals like pigs. They also could have kept their animals on the common land. The common land was where villager's animals could be kept. Experience handed down from one generation to the next, told farmers that if they grew the same crop year after year, then the soil would become exhausted. ...read more.

If the same crop were grown in the same field each year, it would exhaust the soil. They'd keep a field for wheat, a field for barley and a fallow field which animals might be kept in. Then next year they'd swap the fields around, and do the same next year and so on. Selective breeding also started to take place. This is when only the best animals were allowed to breed, so we could get the best meat as possible. In the early 1700s most animals were small scrawny and disease-ridden, but in the 1800's they were much larger and healthier. There were also newer inventions to help out with farming. Because of steel, it meant better tools could be used for farming. ...read more.

Landowners held a strong place in Parliament and they proposed that Parliament introduced a "Corn Law" to solve the problem. This was that foreign wheat must have a tariff put on it by the government so that wheat in England was much cheaper. Firstly this worked in putting an end to foreign competition but the working class couldn't afford to buy wheat, the main part of their diet and so their employers had to give them a pay rise, which they agreed to because they were making more profit from the lack of competition. Eventually, the Prime Minister began to see this wasn't working, and so Peel repealed the Corn Laws. At first farmers thought this would be the end for them but in fact it wasn't at all. Straight afterwards, a Golden Age in farming occurred where British agriculture saw huge prosperity on all levels. ...read more.