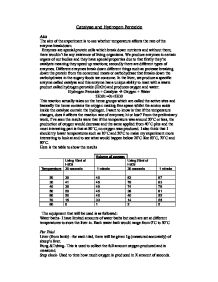 The aim of the experiment is to see whether temperature affects the rate of the enzyme breakdown.

Catalyse and Hydrogen Peroxide Aim The aim of the experiment is to see whether temperature affects the rate of the enzyme breakdown. Enzymes are special protein cells which break down nutrients and without them; there wouldn't be any existence of living organisms. We produce enzymes in certain organs of our bodies and they have special properties due to that firstly they're catalysts meaning they speed up reactions; secondly there are different types of enzymes. Different enzymes break down different things such as protease breaking down the protein from the consumed meats or carbohydrase that breaks down the carbohydrates in the sugary foods we consume. In the liver, we produce a specific enzyme called catalyse and this enzyme has a unique ability to react with a waste product called hydrogen peroxide (H2O2) and produces oxygen and water: Hydrogen Peroxide + Catalyse --> Oxygen + Water 2H202 =02+2H20 This reaction actually takes on the heme groups which are called the active sites and basically the heme contains the oxygen making free space whilst the amino acids inside the catalyse contain the hydrogen. I want to know is that if the temperature changes, does it affects the reaction rate of enzymes; hi or low? From the preliminary work, I've seen the results were that if the temperature was around 20�C or less, the production of oxygen would decrease and the same applied from 40�C plus and the most interesting part is that at 80�C, no oxygen was produced. ...read more.

The results could be reliable depending on whether I enable fair testing; if I do so, I'm guaranteed to have understandable and easy to read results but supposedly the fair test was not followed, results could be changed to something which wouldn't make sense. I'm going to repeat the experiment two times just to make sure that the results seem fair and what I will do is that I will make an average so it'll be better to work with rather than 3 results. The following variables will be controlled to assure a fair test: The most important part of the fair test would be two things; accuracy of the measuring. The liver must be carefully weighed as well as the H2O2 being measured and when using a measuring cylinder, your eye must be in level with the required measurement; if measurements weren't accurate, our results could be modified, ending up with less or more oxygen being produced. Secondly is the gas syringe, I must be holding it due to that if it's left on the table, then the oxygen may not properly push the top back properly due to the friction and this as well could ruin our results. Thirdly would be leaving the liver in the water baths, but if the water baths are at high temperatures such as 50 or so, then you should take it out but quickly and as well as not holding it for too long due to that our hand are at around 30 and the heat from the conical flask would transfer to us. ...read more.

Probably, the improvements for the procedure were the fair testing. I think that at the temperature of 80�C the enzyme should not function at all (fully deform) and I'm quite surprised that only 1ml of oxygen was produced but I think that 1ml might of came from a previous trial. Another improvement to make is the results and strangely enough at 10 and 20�C, both should show different readings of oxygen but they were both quite similar in the trials and the averages were the same but my evidence to support this and the hot temperatures was reasonable enough to back up these odd happenings. If I had the chance to do this experiment again, I would like to change certain things and see whether I would get different results such as the liver type which could affect the rate of the reaction (causing greater/lesser production of oxygen), the temperatures would be a greater range so I would be able to find out what's the lowest temperature that causes the enzyme to deform as well as high temperatures and also using different substances rather than hydrogen peroxide such as potatoes that also contain catalyse or even make the hydrogen peroxide at different temperatures and time it to see if it goes quicker and slower and also to see whether it produces the same quantity of oxygen or different. Once I started doing the research for the introduction I started to understand the structure of catalyse and began getting used to it. ...read more.