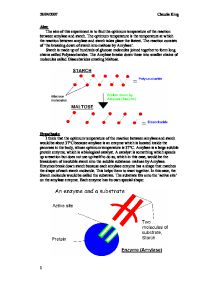 The aim of this experiment is to find the optimum temperature of the reaction between amylase and starch.

Aim: The aim of this experiment is to find the optimum temperature of the reaction between amylase and starch. The optimum temperature is the temperature at which the reaction between amylase and starch takes place the fastest. The reaction consists of 'the breaking down of starch into maltose by Amylase'. Starch is made up of hundreds of glucose molecules joined together to form long chains called Polysaccharides. The Amylase breaks down these into smaller chains of molecules called Disaccharides creating Maltose. Hypothesis: I think that the optimum temperature of the reaction between amylase and starch would be about 37�C because amylase is an enzyme which is located inside the pancreas in the body, whose optimum temperature is 37�C. Amylase is a large soluble protein enzyme, which is a biological catalyst. A catalyst is something which speeds up a reaction but does not use up itself to do so, which in this case, would be the breakdown of insoluble starch into the soluble substance maltose by Amylase. Enzymes break down starch because each amylase enzyme has a shape that matches the shape of each starch molecule. This helps them to react together. In this case, the Starch molecule would be called the substrate. The substrate fits onto the 'active site' on the amylase enzyme. Each enzyme has its own special shape: The lock and key mechanism allows the substrate to fit into the enzymes active site like a jigsaw. The enzyme breaks the substrate into two new molecules. Enzymes can only work in certain conditions. ...read more.

To do this, I placed two test tubes in a beaker filled with water. One test tube contained 5cm� of starch solution and 10 drops of Iodine. The other test tube contained 1cm� of Amylase. I also placed a thermometer in the beaker. (I had placed the Starch and the Amylase in after having measured the right quantities in syringes. I used a dropping pipette to put in the 10 drops of iodine indicator). I then heated up the water in the beaker by placing it on top of a Bunsen burner and heating up the water until it reached a temperature of 25�C. I then left the two test tubes in the beaker for 5 minutes, so that they could reach equilibrium. After that, I put the content of both test tubes into 1 test tube and kept them in the water. I counted how many minutes and seconds it would take for the reaction to take place by using a stopwatch. To do this, I watched the colour of the solution of Starch, Iodine and Amylase. (I did this process with each temperature). I stopped my stopwatch when the solution had turned colourless. At the beginning, in all eight conditions, the reaction had not taken place yet so the Amylase hadn't turned Starch into maltose yet. This meant that since the starch was still present, the Iodine showed this by turning the solutions blue/black. ...read more.

fact that the amylase had formed a lump at the bottom of the test tube and had not mixed with the starch for the reaction to take place. If I was going to do this experiment again I would improve it by using a different technique of heating than a Bunsen burner to heat up the water, such as a hot plate which was controlled by a thermostat. This would be better because it would keep the temperature constant throughout the whole experiment, which is likely to improve it by getting more accurate results. I could also have improved it by stirring the solution much more frequently so that lumps do not occur. I would do this by using a magnetic stirrer. To avoid the iodine problem in future, I would most definitely keep adding iodine. I could improve the experiment by making sure the measurements of the volume if liquid in the syringes is correct, so as to get more precise answers as well as making sure there is the exact same concentration of starch in each dose; since it is insoluble, the concentration may have differed in each dose if not stirred a lot each time. Although I did not find any anomalous results, in future I would do the experiment at least twice to make sure my results are accurate and there have been no mistakes. I could make further investigations by finding the optimum temperature of different enzymes like protease and lipase. I could also find the pH of different enzymes. ...read more.