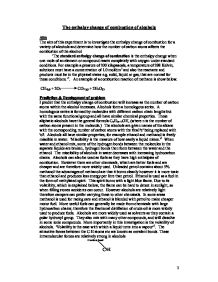 The aim of this experiment is to investigate the enthalpy change of combustion for a variety of alcohols and determine how the number of carbon atoms affects the combustion of the alcohol.

The enthalpy change of combustion of alcohols Aim The aim of this experiment is to investigate the enthalpy change of combustion for a variety of alcohols and determine how the number of carbon atoms affects the combustion of the alcohol. 'The standard enthalpy change of combustion is the enthalpy change when one mole of an element or compound reacts completely with oxygen under standard conditions. For example a pressure of 100 kilopascals, a temperature of 298 Kelvin, solutions must have a concentration of 1.0 mol/dm3 and also the reactants and products must be in the physical states e.g. solid, liquid or gas, that are normal for these conditions.'1. An example of a combustion reaction of methane is show below. CH4(g) + 2O2 CO2 (g) + 2H2O(l) Prediction & Development of problem I predict that the enthalpy change of combustion will increase as the number of carbon atoms within the alcohol increases. Alcohols form a homologous series. A homologous series is formed by molecules with different carbon chain lengths but with the same functional group and all have similar chemical properties. These aliphatic alcohols have the general formula CnH2n+1OH, (where n is the number of carbon atoms present in the molecule.) The alcohols are given names of the alkane with the corresponding number of carbon atoms with the final 'e' being replaced with 'ol'. Alcohols all have similar properties, for example ethanol and methanol is freely miscible in water. 'Miscibility is the measure of how easily a liquid mixes.'2 When water and ethanol mix, some of the hydrogen bonds between the molecules in the separate liquids are broken, hydrogen bonds then form between the water and the ethanol. The miscibility of alcohols in water decreases with increasing hydrocarbon chains. Alcohols can also be used as fuels as they have high enthalpies of combustion. However there are other chemicals, which are better fuels and are cheaper and are therefore more widely used. ...read more.

The mass is therefore recorded to the nearest 0.01 (g). The %error can be calculated as follows, 0.01 x 100 = %error mass (g) The temperature was measured on a thermometer to the nearest degree therefore the % error will be, 1 x 100 = %error temperature (oC) The bulb pipette that measures the volume of water will also cause a % of the errors caused. The pipette that was used in this investigation was quoted as 0.25% It can be seen without the need to actually calculate these values that the % of errors are going to have quite an effect of the accuracy of the results. The %error for the temperatures is relatively large for the error caused by an instrument particularly when considering that the error occurs on the original temperature and the final temperature, and the difference between the temperatures means that the % error could double. Therefore in my modified method I will use a thermometer that measures to the nearest half a degree, and I will record the mass of the alcohols to three decimal places to improve the accuracy of my next set of results. Apparatus : The flame calorimeter Thermometer clamp stand clamp spirit burners stirrer Copper spiral Suction pump rubber tubing Water 550cm3 Alcohols matches Balance Glass calorimeter Method (after two modifications) * Place the alcohols in small clearly labelled spirit burners. * Place 550cm3 of water into the apparatus, containing the copper spiral, and the metal stirrer.(A metal stirrer had to be used as this was attached to the apparatus.) * Clamp the calorimeter, and also its base onto the clamp stand * weigh the spirit burner containing the alcohol and its lid on the balance which can be recorded to 3.d.p * Record the starting temperature of the water using a thermometer to 0.5 of a degree as this will make the results a lot more accurate. ...read more.

However as time and apparatus were limited this was not possible. These results were overall much more accurate and reliable as a definite trend can be seen. The increase in enthalpy change of combustion per carbon atom in the chain length was very similar to that calculated using the bond energy calculations. These results were also closer to that stated in the data book than the they were for the previous method. The apparatus used were more accurate in this method which reduced the amount of systematic error within the method. For example the thermometer used could measure to the nearest half a degree where as in the previous method the thermometer only measured to the nearest degree. The spirit burners containing the alcohols were also measure to three decimal places instead of two as it was in the last method. The % error is calculated below. Thermometer % error = 0.5x100 temperature (0C) Using the results from methanol the starting temperature was 25.5 degrees % error = 0.5x100 25.5 =2.0% 2% is still quite a large value caused by instrumental error and therefore could be reduced still by using a thermometer which measure to 0.2 of a degree. The % error for the balance using the initial mass of methanol is, % error = 0.001x100 14.245 =0.007% The error produced by the balance is very little and will not be the cause of the inaccuracy in my results There was also still human error involved in the method when recording the temperature however the slightly more accurate thermometer reduces this. To conclude from this investigation I have discovered that the enthalpy change of combustion does increase as the carbon chain length within the alcohol increases. The straight chain alcohols have a greater enthalpy change of combustion than that of their isomers with branched chains. This experiment could still have been improved by repeating three readings for each alcohol. Another improvement to this method would have been to use a data logger to record the increase in temperature as that would eliminated the majority of the human error that was involved. ...read more.