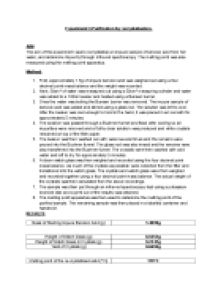 The aim of this experiment was to recrystallise an impure sample of benzoic acid from hot water, and determine its purity through infra-red spectroscopy.

﻿Experiment 4-Purification by recrystalisation. AIM The aim of this experiment was to recrystallise an impure sample of benzoic acid from hot water, and determine its purity through infra-red spectroscopy. The melting point was also measured using the melting point apparatus. Method: 1. First, approximately 1.5g of impure benzoic acid was weighed out using a four decimal point mass balance and the weight was recorded. 2. Next, 50cm3 of water was measured out using a 50cm3 measuring cylinder and water was added to a 100ml beaker and heated using a Bunsen burner. 3. Once the water was boiling the Bunsen burner was removed. The impure sample of benzoic acid was added and stirred using a glass rod. The solution was left to cool. After the beaker was cool enough to hold in the hand, it was placed in an ice bath for approximately 5 minutes. 4. The solution was passed through a Buchner funnel and flask after cooling so all impurities were removed and a frothy clear solution was produced and white crystals remained on top of the filter paper. 5. The beaker was then washed out with water several times and the remains were poured into the Buchner funnel. ...read more.

In the IR spectra of the sample obtained during the experiment this peak has completely disappeared suggesting that the sample is purer then the impure sample. There was a peak in the IR spectra of the impure benzoic acid, which was not present in the pure IR spectra. This was a single peak of wavelength 3444.75 cm-1. This could be the O-H bond of an impurity like an alcohol group. In the IR spectra of the sample obtained in the experiment, the peak is not present. This also contributes to the idea of a purer sample being obtained. A colorimetric test for the anionic impurity of [SCN]- is to add iron(III). Once this is added, if a thiocyanate ion is present then the solution will turn to a dark red colour [1] . DISCUSSION Goggles, lab coats and gloves must be worn at all times during this experiment. This is important as benzoic acid is an irritant. It is harmful if swallowed or inhaled. If in contact with skin it can cause redness over a long period of time. The use of compressed KBr discs is an easier and more reliable method of infa-red spectroscopy than the ?mull? method of infra-red spectroscopy. ...read more.

This shows that the sample was not completely pure and that there were some signs of impurities present which lowers the melting temperature and broadens the range [3] . This contradicts the IR spectra, as the impurity seemed to have disappeared completely due to the peaks in question not being there therefore the percentage yield in reality is lower than 44.63% dependant on how pure the sample is. CONCLUSION The purity of a sample is not always 100% pure due to some of the impurities remaining, mostly due to human error which have been discussed in this report shown by the melting point of the recrystallised sample being lower than that of the expected pure benzoic acid. The Infrared spectroscopy method for this experiment is also quite difficult because there are many different bonds for each group so it is confusing to find what the contaminant really is. Finally, this experiment has a low percentage yield at 47.17% due to all the errors at transferring at the different stages of the experiment. REFRENCE [1] ? Goswami, D.C and Kalita, H. (1988), Rapid Determination of Iron in Water by Modified Thiocyanate Method (DefSci J, Vol38, NO. 2, p177-182) [2] ? Seamus P.J.Higson, Analytical Chemistry (2004) Pages 349-350, Oxford University Press [3] ? Royal Society of Chemistry, URL: http://www.rsc.org/learn-chemistry/content/filerepository/CMP/00/000/615/microscale%2040.pdf?v=1351970802043 Accessed on 17/11/12 ...read more.