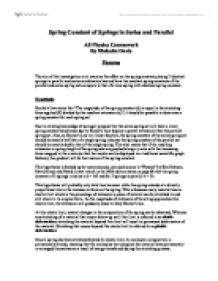 Spring Constant of Springs in Series and Parallel

Hooke’s Law states that “The magnitude of the spring constant (k) is equal to the stretching force applied (F) divided by the resultant extension (x)”, it should be possible to determine a spring constant for each spring set.

This hypothesis is backed up by many sources, one such source is “Physics” by Ken Dobson, David Grace and David Lovettwhich in the 2000 edition states on page 90 that the spring constant of 2 springs in series is k = k/2 and for 2 springs in parallel k = 2k

This hypothesis will probably only hold true however while the spring extends at a directly proportional rate to the increase in force on the spring.

As mentioned in the plan, the results above do not show the actual extension of the springs (which is what is to be looked it during the analysis), however they show the total length of the spring(s), including the original spring length.

I have therefor completed tables below of the actual extension of the spring in each case. These extension values have been found by subtracting the original length of the spring (found before conducting each experiment) from the total length shown in the above tables. As the analysis only uses the average results of the 3 runs for each spring

These limitations all had possible negative effects on the results and in future experiments it would be advisable that modifications be made to minimise them. Some possible solutions to overcome the above mentioned problems could be respectively: 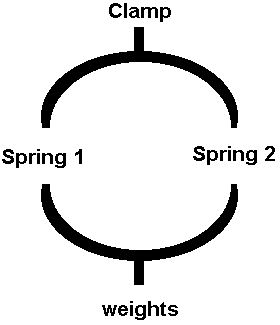 The experiments used in this investigation could be improved by using the modifications stated above however in general the experiments used proved satisfactory for obtaining results which were accurate enough to high light the described relationship.