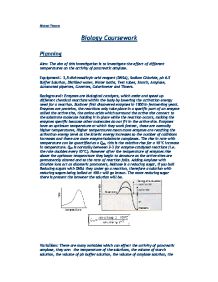 The aim of this investigation is to investigate the effect of different temperatures on the activity of pancreatic amylase.

Michael Thomas Biology Coursework Planning Aim: The aim of this investigation is to investigate the effect of different temperatures on the activity of pancreatic amylase. Equipment: 3,5-dinitrosalicyic acid reagent (DNSA), Sodium Chloride, ph 6.5 Buffer Solution, Distilled water, Water baths, Test tubes, Starch, Amylase, Automated pipettes, Cuvettes, Colorimeter and Timers. Background: Enzymes are biological catalysts, which assist and speed up different chemical reactions within the body by lowering the activation energy need for a reaction. Buchner first discovered enzymes in 1900 in fermenting yeast. Enzymes are proteins, the reactions only take place in a specific part of an enzyme called the active site, the amino acids which surround the active site connect to the substrate molecule holding it in place while the reaction occurs, making the enzymes specific because other molecules do not fit in the active site. Enzymes have an optimum temperature at which they work fastest, these are normally higher temperatures, Higher temperatures mean more enzymes are reaching the activation energy level as the kinetic energy increases so the number of collisions increases and there are more enzyme/substrate complexes. The rise in rate with temperature can be quantified as a Q10, this is the relative rise for a 10�C increase in temperature. Q10 is normally between 2-3 for enzyme-catalysed reactions (i.e. the rate doubles every 10�C). However after the temperature of enzymes rise above the optimum temperature they begin to denature as the active sites are permanently altered and so the rate of reaction falls. ...read more.

I will try and repeat the experiment to get an average absorbance value for each temperature. Preliminary experiment: I performed a preliminary experiment before starting this investigation; this tested the effect of different temperatures on pancreatic amylase, I performed tests at two different temperatures, one was at 50 C and the other was a blank at room temperature (21 C). The results were as follows: Temperature/ C Actual Temperature/ C Average Absorbance/% Absorbance Value% 1 2 Room 21 0 0 0 50 51 0.995 0. 98 1.1 The preliminary results are not that reliable a basis for my prediction because I only did two different temperatures and I needed a larger number of different temperatures to hep get a more reliable basis for my prediction. Prediction: Based on my background knowledge and my results obtained from my preliminary experiment I predict that the higher the temperature is, the higher the rate of reaction of enzymes will be up until roughly 55 C which I believe is the optimum temperature. After the temperature rises higher than 55 C the rate of reaction will begin to fall as enzymes start to become denatured because the high temperature alters the shape of the active site meaning that substrates can not enter and react. Quantitative prediction: Temperature/ C Absorbance Value% 0 0 Room (21) 0 35 0.50 40 0.70 45 0.95 50 1.1 55 1.2 60 0.95 65 0.30 70 0 I will record my results using a table of results and a graph showing a line of best fit. ...read more.

I was very careful that all precautions to keep all other variables other than the temperature at a constant level, followed however when filling the colorimeter containers small amounts of the solution ran down the sides of the curvettes on occasion and also some of the curvettes had scratch marks on them, this may have resulted in slightly less accurate results but did not seem to have a mayor effect. I believe that my method was good as the results I obtained agreed with my theory. The results still followed the general trend of the model rate/temperature graph shown underneath my paragraph on background. It was also a fair and safe experiment as all precautions were followed regarding safety and only changing one variable. Other possible experiments: There Other factors that I could investigate to further this investigation, for example I could test the effect of different concentrations of enzymes, the effects of different ph levels or the effects of different concentrations of substrate and the effect they would have on the activity of pancreatic amylase. I could also test to find out the different optimum temperatures and ph levels of different enzymes. Conclusion: I believe that the investigation was suitably accurate and reliable and the conclusions drawn from the results to be correct however there were ways in which the investigation could have been improved and made more accurate. I am confident that my conclusion is accurate despite having to use an old colorimeter to obtain my results. ...read more.