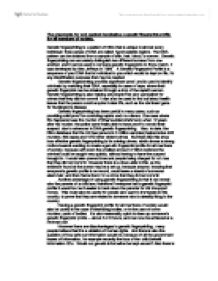 The arguments for and against developing a genetic fingerprint profile for all members of society.

This could also be useful for people who want to immigrate to this country, to prove that they are related to someone who is already living in the country. Having a genetic fingerprint profile for all members of society would also be useful in the case of identifying bodies, or in the case of some murders, parts of bodies. It is also reasonably quick to draw up someone's genetic fingerprint profile - about 5 or 6 hours, and can now be achieved at a minimal cost. However there are disadvantages to genetic fingerprinting, many people believe that it is a violation of human rights. And there is also the question of how safe our information would be, because of all the government losses of information, for example recently the loss of the child benefit information CDs. Would our genetic information be kept secure? Also there is the potential that peoples DNA information could get mixed up, and people who are innocent could get imprisoned for a crime they didn't commit because of virtually "flawless" DNA proof. ...read more.