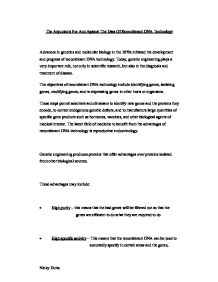 The Arguments For And Against The Uses Of Recombinant DNA Technology

The Arguments For And Against The Uses Of Recombinant DNA Technology Advances in genetics and molecular biology in the 1970s initiated the development and progress of recombinant DNA technology. Today, genetic engineering plays a very important role, not only in scientific research, but also in the diagnosis and treatment of disease. The objectives of recombinant DNA technology include identifying genes, isolating genes, modifying genes, and re-expressing genes in other hosts or organisms. These steps permit scientists and clinicians to identify new genes and the proteins they encode, to correct endogenous genetic defects, and to manufacture large quantities of specific gene products such as hormones, vaccines, and other biological agents of medical interest. The latest field of medicine to benefit from the advantages of recombinant DNA technology is reproductive endocrinology. Genetic engineering produces proteins that offer advantages over proteins isolated from other biological sources. These advantages may include: * High purity - this means that the bad genes will be filtered out so that the genes are efficient to do what they are required to do * High specific activity - This means that the recombinant DNA can be used to accurately specify in certain areas and the genes, which carry out certain tasks, can specify in certain areas. ...read more.

Many people all over the world suffer from a lack of sugar in their body. Bovine and porcine insulin was used which was very similar to human insulin but then it was realised that many people produced anti bodies against this insulin which neutralised its actions. Another factor was that people had to constantly inject them selves for the rest of their lives with this insulin to keep them alive. Then came research in to inserting the insulin gene into a suitable vector in the human. This would cause the E. coli bacteria cell, to produce an insulin which is chemically identical to its naturally produced counterpart. This is an example of how recombinant DNA can be used to help people who have medical problems. With this system the human is producing a protein inside of them which will provide them constantly with insulin meaning that they don't need to constantly take injections. This way is not only saving the person with this defect time but will also make them physically and mentally more confident as they will know that every thing they do that the insulin will still be being produced inside their body to keep the level of sugar inside them at a suitable level. ...read more.

People will have the power to change that they are in a genetic sense and nobody will be able to stop them. People will no longer be what they were supposed to be but just a genetically modified human being. Where could a limit be drawn to say only certain things can be done using recombinant DNA and can only be used by certain people. Although it is a wonderful solution to a lot of disease it is also a way of changing the human gene and as time goes on the main question will always be when do we stop. Maybe one day everybody will be a genetically modifies human being and their will no longer exist the human being as we know it today. At the end of the day someone must decide if this process is going to carry on and if the answer is yes how far until the line is drawn. Information found from: Biology by Michael Roberts, Michael Reiss and Grace Monger AS Biology by Bill Indge, Martin Rowland and Magraret Baker Encarta Encyclopaedia Britannica Encyclopedia www.poetsrx.com http://esg-www.mit.edu:8001/esgbio/rdna/rdnadir.html http://molecularmedicine.com Nicky Dutta ...read more.