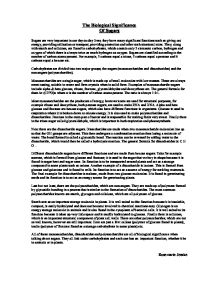 The Biological Significance Of Sugars.

The Biological Significance Of Sugars Sugars are very important in our day-to-day lives; they have many significant functions such as giving out energy, providing utilisation or transport, providing protection and other such structural roles. They, along with starch and cellulose, are found in carbohydrates, which contain only 3 elements: carbon, hydrogen and oxygen of which there is always twice as much hydrogen as oxygen. Sugars are classified according to the number of carbon atoms present. For example, 3 carbons equal a triose, 5 carbons equal a pentose and 6 carbons equal a hexose etc. Carbohydrates are divided into two major groups, the sugars (monosaccharides and disaccharides) and the non-sugars (polysaccharides). Monosaccharides are a single sugar, which is made up of small molecules with low masses. ...read more.

Next there are the disaccharide sugars. Disaccharides are made when two monosaccharide molecules line up so that the OH groups are adjacent. This then undergoes a condensation reaction thus losing a molecule of water. The bond formed is called a glycosidic bond. The reaction can be reversed by adding water to the disaccharide, which would then be called a hydrolysis reaction. The general formula for disaccharides is: C H O . Different disaccharide sugars have different functions and are made from hexose sugars. Take for example sucrose, which is formed from glucose and fructose; it is used in the sugar that we buy in shops because it is found in sugar beet and sugar cane. Its function is to be transported around plants and act as a storage compound in some plants such as onions. ...read more.

It is well suited to this function because it is insoluble, compact, is easily hydrolysed and does not become involved in chemical reactions easy. Glycogen is an energy storage molecule in animals and is also found in the cytoplasm of bacterial cells. It is well suited to its function because it takes up very little space and is readily hydrolysed to glucose. Finally there is cellulose, which is an important structural component of plant cell walls. There are other polysaccharides, which are not as well known, however are still important. Here are just a few: callose (polymer of glucose found in plants), inulin (polymer of fructose found as a storage carbohydrate in some plants) etc. All of these monosaccharides, disaccharides and polysaccharides are all of biological significance when talking about sugars. They all link under carbohydrates and each one has an important function, whether it be in animals or in plants. Rosemarie Jeszke ...read more.