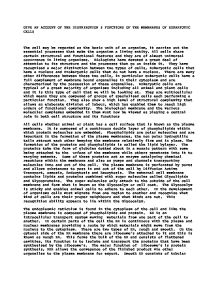 The cell may be regarded as the basic unit of an organism it carries out the essential processes that make the organism a living entity. All cells share certain structyral and functional features and they are of almost universal occurance in living organi

GIVE AN ACCOUNT OF THE DISTRIBUTION & FUNCTIONS OF THE MEMBRANES OF EUKARYOTIC CELLS The cell may be regarded as the basic unit of an organism, it carries out the essential processes that make the organism a living entity. All cells share certain structural and functional features and they are of almost universal occurrence in living organisms. Biologists have devoted a great deal of attention to its structure and the processes that go on inside it. They have recognised a major distinction between two types of cells, Eukaryotic cells that have a nucleus and Prokaryotic cells that do not have a nucleus. There are many other differences between these two cells, in particular eukaryotic cells have a full complement of membrane bound organelles in their cytoplasm and are characterised by the possession of these organelles. Eukaryotic cells are typical of a great majority of organisms including all animal and plant cells and it is this type of cell that we will be looking at. They are multicellular which means they are composed of groups of specialised cells each performing a particular function. They also show a high level of structural complexity that allows an elaborate division of labour, which has enabled them to reach high orders of functional complexity. The biological membrane and the various molecular complexes embedded in them must now be viewed as playing a central role in both cell structure and its functions All cells whether animal or plant has a cell surface that is known as the plasma membrane. ...read more.

This forms the bulk of the ER and consists of flattened cavities, its function is to isolate and transport the proteins that have been synthesised by the ribosome's. The major function of ribosome's is protein synthesis, RER allows the conveyance of the finished product via other organelles to the plasma membrane for export. Smooth ER consists of tubular cavities and does not have ribosome's attached, it is concerned with synthesis and transport of lipids and steroids. Proteins produced by the ribosome's are believed to move to the Golgi Apparatus via Rough ER The Golgi Apparatus is an assembly point through which raw materials for secretion are funnelled before being shed from the cell. It consists of a stack of flattened membrane bound sacs continuously being formed at one end and budded off as vesicles at the other. At times the Golgi modifies the cell products it contains, the protein received from the RER has polysaccharides added to it producing glycoproteins. Similarly it modifies lipids into Glycolipids, these products are then wrapped into various types of ecretary vesicles for movement to the cell membrane so they can discharge their contents. After which the membranes of the vesicles become fused with the plasma membrane thereby providing the cell with additional surface area. The vesicles also contain digestive enzymes and become Lysosomes. ...read more.

The nuclear envelope is perforated by pores through which certain substances may pass from the nucleus into the cytoplasm and vice versa. The pores are thought to be surrounded by protein and lined with hydrophilic groups which make them readily penetrated by water soluble substances. The pores are partly plugged by complexes of ribonucleic acids and proteins which regulate the passage of molecules between the nucleus and the cytoplasm. The outer membrane is continuous with the endoplasmic reticulum. Chloroplasts are unique to plants and are found in the green cells, they are urrounded by a double membrane and have an elaborate internal membrane system called Lamellae which consist of two membranes. At certain points these form sac like structures called Thylakoids, each thylakoid consists of a pair of membranes close to each other with a narrow space between. In places the thylakoids are arranged in neat stacks and form a Granum and this is where the green pigment Chlorophyll is found. These membranes are embedded in a fluid Stroma which contains the enzyme involved in light independent reaction. The function of the thylakoid membranes is to hold the chlorophyll molecules in a suitable position for trapping the maximum amount of light energy. The internal organisation of the chloroplast provides a large surface area without taking up too much room. ...read more.