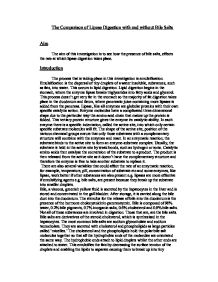 The Comparison of Lipase Digestion with and without Bile Salts.

The Comparison of Lipase Digestion with and without Bile Salts Aim The aim of this investigation is to see how the presence of bile salts, effects the rate at which lipase digestion takes place. Introduction The process that is taking place in this investigation is emulsification. Emulsification is the dispersal of tiny droplets of a water insoluble, substances, such as fats, into water. This occurs in lipid digestion. Lipid digestion begins in the stomach, where the enzyme lipase breaks triglycerides into fatty acids and glycerol. This process doesn't get very far in the stomach so the majority of fat digestion takes place in the duodenum and ileum, where pancreatic juice containing more lipases is added from the pancreas. Lipase, like all enzymes are globular proteins with their own specific catalytic action. Enzyme molecules have a complicated three-dimensional shape due to the particular way the amino acid chain that makes up the protein is folded. This tertiary protein structure gives the enzyme its catalytic ability. In each enzyme there is a specific indentation, called the active site, into which only certain specific substrate molecules will fit. The shape of the active site, position of the various chemical groups ensure that only those substrates with a complementary structure will combine with the enzymes and react. In an enzymatic reaction, the substrate binds to the active site to form an enzyme-substrate complex. ...read more.

Although throughout the procedure I came across a limitation with using milk as my substrate. Milk was not an ideal substrate as it contains it's own enzymes which emulsify fat globules. Therefore this meant that the fat globules were not that large to start off with, and so the effect of increasing the bile salts concentration would have terminated a lot quicker due to the optimum surface area being reached sooner. Another limitation with the procedure that will effect the validity of my results is that I was measuring the rate by using a colour change, which did not have a distinct cut off point therefore the timing of when to stop the stop clock will not have been fully accurate. Another confounding variable that was not accounted for was the length of time the test tubes were in the water bath for, before adding the lipase and bile salts to conduct the actual reaction. Some test tubes were in the water bath longer than others, which will have given some of the initial solutions a chance to heat up quicker, which in turn will effect the rate of the enzymes. Therefore future planning would involve leaving each test tube in the water bath for a set period of time before adding the lipase and bile salts. Also an additional experimental error would be that after adding the lipase and bile salts each test tube was shaken but it may have resulted in unfair testing as not each one was shaken equally. ...read more.